By Hunter Elliott on June 14, 2015 in ballistic testing, Gun Talk 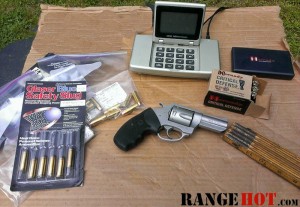 A grouped dubbed the The .44 Associates formed around the end of the 1920s and was made up of such legends such as Charles Allan “Skeeter” Skelton and the famed Elmer Keith. The .44 Associates begin to really develop and push the .44 Special trading information with one another. It was not long and the potential of the .44 Special was realized and loads that were developed by that crowd are still around today and considered ideal. Elmer Keith had a huge part in the development of the .44 Remington Magnum, based directly off the .44 Special by lengthening the case  by .125″. Keith had suggested the round be called the .44 Special Magnum but Remington choose just .44 Magnum.

The .44 Special, though less powerful than the .44 Magnum, has distinct advantages. It is a shorter round so it can be chambered in smaller, lighter revolvers. Such revolvers are more conducive to carry. With such short barreled revolvers smaller bullets with high pressure cartridges such as the .357 Magnum are excellent cartridges but require longer barrel lengths to really perform. Take a large slower bullet that makes it’s energy with mass more than velocity and it can shine from a shorter barrel. Enter the .44 Special. A heavy slow slug that works great in revolvers that are easily carried, not unlike the .45 Automatic. The .44 Special and .45 Automatic have very similar ballistics.

With all that in mind, I choose the Charter Arms Bulldog, reviewed here for the ballistic test since it is designed primarily as a self defense handgun.

As with the previous ballistic tests we shot the rounds over a chronograph into bare ballistic gel. Recovered the bullet, measured how deep it penetrated, how much it expanded, and weight retention. Then we did the same SOP with 3 layers of khaki work pants type material. 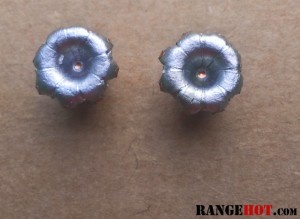 Please click on the chart for a larger version

The first reload, the 240gr LSWC was loaded with Unique, the second was Blue Dot, the third was Power Pistol, and the fourth was American Select

As you can see, the Hornady Critical Defense and Glaser Safety Slug performed very well as a defensive round while the others penetrated deep enough that I would consider as hunting rounds. The PMC SWC was very mild recoiling and an accurate round.  I would have no problem with using the Bulldog as a carry handgun or with any of the other rounds would do well as a woods gun. It is true you can shoot .44 Special through a .44 Magnum and with a longer barrel you would get increased performance, but if you are going with a large revolver, why not carry .44 Magnum, though that may be a bit much for a self defense round, sorry Dirty Harry, but .44 Magnum would not be my first choice for a concealed carry defensive round for preservation of one’s self. 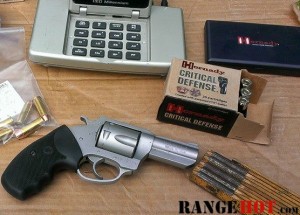 As always the Charter Arms preformed well and did the job as I asked, I am now seriously considering cleaning it for the first time, one day….soonish.  Promise.