By Hunter Elliott on July 4, 2016 in Product Reviews 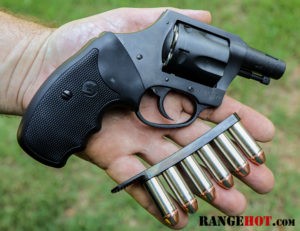 Charter Arms introduced the five shot .44 S&W Special, Boomer, which is based on their Bulldog, which I reviewed about two years ago. You can read that review by following this link. 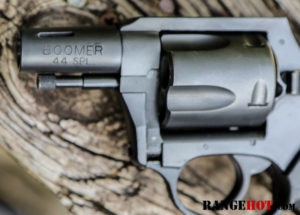 The Boomer differs from the traditional Bulldog in that it is double action only, is ported, and does not have a front sight. 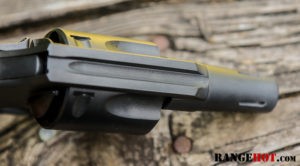 Now, hang on just a minute before you panic about the lack of a front sight. The Boomer has a channel that runs along the top strap, as with the Bulldog, you can reference to sight the revolver. The Boomer does have a 6 O’ Clock hold, and what I mean by that is instead of cutting the target in half for correct sight picture, you hold the revolver at the bottom of the target. 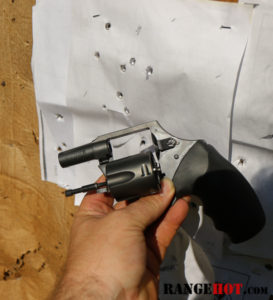 Typical twenty five feet group from the Boomer but the point of aim is about ten inches below point of impact. As with all defensive firearms, you will need to put in the range time to become proficient with the Boomer before you press it into service. 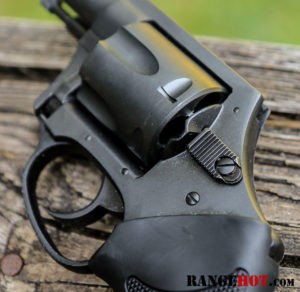 The cylinder release is well serrated and worked exactly as it should. 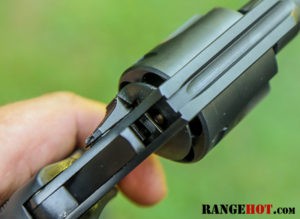 The Boomer has a hammer safety allowing you to carry the revolver with all cylinders loaded. 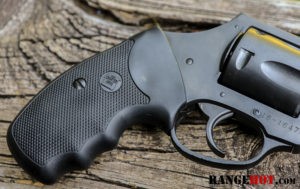 The overmolded rubber stocks provided a bit of cushion. 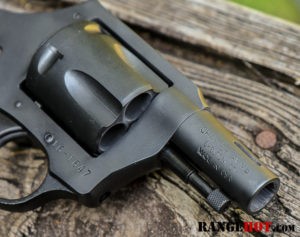 Old school lines without a barrel shroud but breaking away from tradition with no front sight and porting. The ports help to suppress muzzle flip but you need to be mindful of those ports if you had to deploy the Boomer in a retention manner. Shooting this revolver from retention should incorporate canting the muzzle away from you.

Make no mistake, this is not a bullseye handgun but with practice it is plenty sufficient for what this revolver was designed for, as a get the hell off me gun. After about fifty rounds I had no trouble keeping the rounds on an eight inch target at twenty feet. Being double action only it does take some practice to get the hang of it.

How did the little revolver get the name, Boomer? When it was being developed a prototype of the revolver was left on the table, unattended. It was not long when Mr. Nick Ecker’s newly adopted Golden Retriever picked it up off the table and chewed up the stocks. Well the dog’s name is Boomer so naturally it made sense to transfer that name to the newly designed revolver. Before anyone makes any assumptions, the revolver was of course, unloaded. 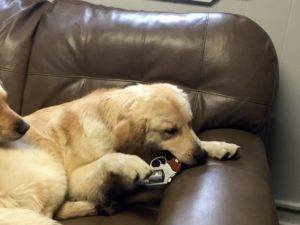 Thank you to Charter Arms for the story and photograph.

The Charter Arms Boomer is a purpose built revolver for concealed carry. It is not particularly fun to shoot, though not bad either.  Being ported and without a front sight, it takes a bit more range time to get used to than your average handgun. Being ported, you do have that working in your favor for recoil reduction, which is much needed in this handgun, but you have to keep that in mind if you had to shoot from retention. I did try the Boomer from retention and I could indeed feel the heat from the ports. In a snub nose revolver, you are going to loose velocity so I always opt for a big heavy bullet to make up a bit for the velocity loss.  The new Nitride finish has held up well over the test and as expected there were no malfunctions. I realize revolvers have limited capacity and with many of the big bore Charter Arms you will be limited to five shots. That being said with revolvers you do have some advantages. For one, they tend to be very reliable and are not particular on what ammunition you are running. Some autoloaders are sensitive to limp wristing, where the revolver is more mechanical and less subject to such things. I am not a really a fan of off body concealed carry but I know many women who pocket book carry. Some will keep their hand in their pocket book while walking . With a revolver, if God forbid, they had to fire through their pocket book to save a life, the revolver would function whereas an autoloader could malfunction. In such a situation, you have gone from a single round from an autoloader, to capacity of a revolver. Though I like the Boomer and it ran without issue, I do not think this would be a good option for the new shooter or first time revolver owner.

7 Responses to Charter Arms Boomer, and they ain’t lying.