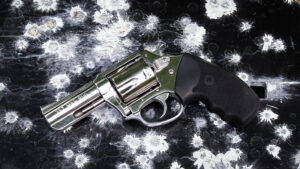 A new rendition of the Charter Arms   Mag Pug with a three-inch barrel, adjustable rear sight, and a high polished stainless finish is available for about $400 street price. 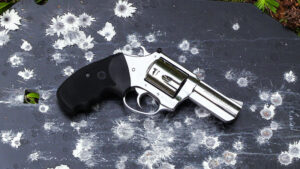 While the .357 Magnum was a little stout in this small revolver the over-molded rubber stocks with finger grooves help tame that recoil a bit.  I prefer the look of the ejector shroud finishing at the muzzle; I think it makes for a cleaner look. The traditional cylinder release is operated by pushing it in and swinging the cylinder to your left. 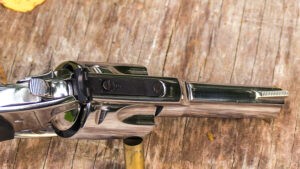 The rear adjustable sight runs down most of the back strap and the front sight is serrated. Those features truly help cut down on glare on the sights. 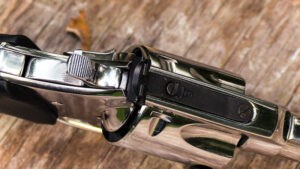 The hammer spur is serrated for a solid purchase when shooting the revolver single action.

After about 200 rounds of primarily .357 Magnum with some .38 Special, there were no issues, as expected. Accuracy was good with easily keeping five shots in a six-inch circle from twenty-five feet, offhand. I have reviewed a lot of Charter Arms revolvers, and while they are on the inexpensive side, they have all been reliable. Charter Arms builds revolvers, and that is about all they build, so by now, I expect they have it figured it out. The .357 Magnum is considered, by many, the gold standard in defensive cartridges and a five-shot double-action revolver is about as old school reliable as you can get. If you are in the market for a new revolver or a defensive handgun you should check out Charter Arms. They build dozens of models in all the popular calibers so I am confident you would be able to find something that suits you. I am satisfied with the Charter Arms high polished stainless steel revolver