By Hunter Elliott on February 20, 2014 in Product Reviews

Your carry pistol should be an extension of yourself.  About the only way I know to gain proficiency with your sidearm is practice. Truthfully, practice is not really enough but perfect practice is really what you should go for.

With all that perfect practice comes the expense of ammunition, the greatest cost in regular training and matches. Especially today many do not have the disposable income to buy thousands of factory loaded rounds, so many turn to reloading to cuts costs. This is a great step in the right direction but there is another outlet to really cuts costs and that is casting your own bullets from lead.  If you are interested in casting here is a link to an article I put together on casting. It is a very rewarding hobby and another way to get more from your training fund. 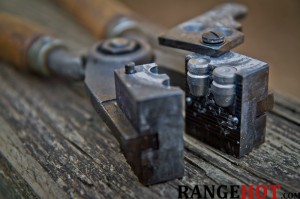 This particular article is on the two-cavity Lyman mould number 401638, which is a 175gr truncated cone bullet that is for .40 caliber bores.  I ordered this mould along with a .400″ and a .401″ sizing die and top punch #43. As with all Lyman moulds, the quality and fit is top notch. All of my moulds are Lyman and though there are other quality moulds to be sure, for the money Lyman is very tough to beat. 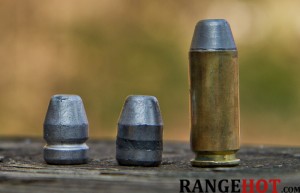 Using wheel weights the mould dropped bullets that weighed 175.5gr and measured .403″. Lubed with Lyman Alox and sized to .401″ the bullets weighed in at 178gr.

I began loading using 7.7gr IMR 800X and worked up to 8.6gr, which is the maximum load in the Lyman manual. I caution when working to max loads, starting at the initial load and working up slowly, watching for pressure signs. I was checking accuracy as I was working up the load and from a rest at twenty-five yards using the Glock 20 with a Lonewolf barrel I was able to average one inch groups throughout the work up. Once I got to 8.6gr and got used to the load I was able to print a few three-quarter inch groups from twenty-five yards using the same set up. I was able to get a little better grouping using the Colt Delta Elite and the same set up, but for all intended proposes my best groups printed 3/4″ inch.    That my friends, is about as good as I can shoot with forty year old eyes and with the slightest hint of a tequila hangover. It was however really good tequila but I digress. 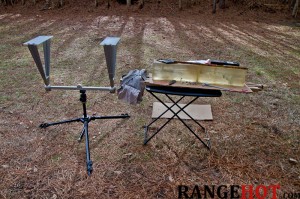 Also on hand for the test was two FBI blocks of Clear Ballistics ballistic gel to measure penetration. I can tell you that the 8.6gr IMR 800X load averaged 1236 feet per second measured with a CED chronograph ten feet from a 4.6″ barrel. Penetration was through three layers of thick cloth, thirty-two inches of ballistic gel, two pieces of heavy cardboard at the end of the gel, and a pine 2 X 4. The bullet had enough energy to kick up a double handful of dirt on the impact berm some twenty feet away. I tried the same test three times with the exact same results. Not bad at all for that load but the gel was not thrilled in the least.

I had zero feeding issues using a Colt Delta Elite and the Glock 20 with the Lonewolf barrel or factory barrel.

As always the Lyman mould produced a pretty nice bullet that preformed well and gave no feeding issues. I believe this bullet would be great for target shooting as well as hunting as accuracy was consistent throughout powder charges. With heavy charges it penetrated deeply, which you would need when hunting thick skinned animals. This bullet however did not expand at all so keep that in mind when thinking about your needs in a hunting bullet. 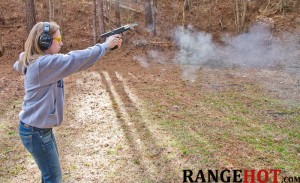 As you can see, recoil was great but manageable, even for Allison. She is 5 feet even, 110 pounds, and new to the 10mm Auto but she was able to fall right in and get good hits. You will also notice that 8.6gr of IMR 800X and Lyman Alox lube make a lot of smoke but after a few hundred rounds no leading to speak of in the bore. At the end of the day a single push of a bore brush through the Lonewolf barrel and it was as good as new. I have yet to clean the Colt Delta Elite, as the test for that pistol begun with this mould review.

Lonewolf barrel in Gen 3 Glock 20
The Kel-Tec PLR 16. More than a good time