Since the subject of magazines comes up a lot…

There is only one magazine design that presents the cartridge to the 1911’s chamber correctly and guarantees full controlled feed…as designed and intended.

That would be the original or “GI” design that allows the rear of the cartridge to rise at close to the same angle that the front assumes as it moves forward. It starts to release the round as soon as it moves while still keeping it in control so that when it achieves final release, the rim is already under the extractor…so that if something happens to cause the magazine to release it abruptly, it can’t go anywhere except where it’s supposed to go. 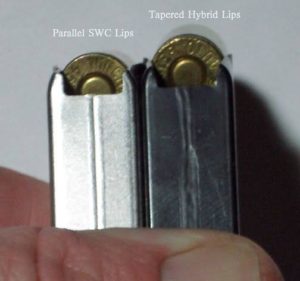 Pictured below are two 7-round magazines with the “tit” on the followers. One is a parallel lip or “wadcutter” design and the other is a tapered lip “Hybrid” design…which provides the rise at the rear AND a timed release point that comes a little later than the former design…though not quite as late as the original.

The cartridge has been stopped by the follower bump…as intended…just before the final release point. This point is identical to the one on the original follower, and final release is effected at the same time as the original, with one small difference. Rather than releasing the round suddenly, the GI magazine releases a little more gradually with the last part of the taper acting as a brake of sorts. A final redundancy that works to insure that the magazine doesn’t lose control of the round until it’s well under the extractor.

When the rear of the cartridge is higher, it enters the chamber at a lower angle…making feeding sure and smooth rather than clunky. If the extractor has the correct amount of deflection, the shooter often isn’t able to tell by feel that the gun even fed…even on the top round of a fresh magazine.

Specs are important. All specs…and the magazine is no exception. That magazine wasn’t an afterthought.
The 1911 pistol was presumably going to war at some point, and functional reliability was critical…both for that reason and because whoever submitted the best pistol would be awarded a lucrative contract.

That magazine wasn’t an afterthought, hastily thrown together in the 11th hour. It was carefully designed by a genius and a team of Colt’s top engineers.

The problem with the 1911 is that so many have been trying for so long to prove that they’re smarter than John Browning, they really believe they have.

As I’ve often said: The 1911 was designed to function. If it’s built to correct specs and fed decent ammunition from a PROPER magazine…it WILL function. It’s a machine. It doesn’t have a choice.

This picture is easily worth a thousand words. It illustrates the magazine’s critical role in controlled feed. Some will accept this. Others won’t. Wilson Combat magazines

The parallel lips don’t present the round to the chamber properly, and unless that silly little speed bump is on the follower, leads to lost of control on the last round and push feeding where the extractor claw snaps over the case rim…which beats the tension out of the extractor or causes it to fail outright. This has led to the erroneous belief that the 1911’s extractor requires frequent “tuning” and periodic replacement.

View all posts by John Travis →

PWS MK112. The good the badest upper on the market!
Bore-Tips by Swab-Its

One Response to More on the 1911 magazine.