By Hunter Elliott on August 10, 2020 in Product Reviews 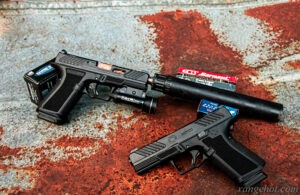 SHOT show 2019 I was fortunate enough to meet the crowd from Shadow Systems and get a good look at the then new MR 920, replacing the previous MR 918, both chambered in 9mm Luger. The MR 918 was an innovative pistol to be sure, but for a company that cut its teeth on customizing Glock pistols, they are always looking to make that next improvement. After getting feedback from shooters and customers, the MR 920 debuted. It was a few months ago I received samples in both models, the MR 920 Elite and Combat. The pistols are similar but different.

Looking from the top,, you will see while they both use the Universal Optic Cut that will accommodate Trijicon RMR and SRO, Holosun 507c, and 508t, Leupold Deltapoint Pro, Vortex Viper, and TruGlo Tru-Tec. The Elite has some aggressive serrations from the ejector port to the muzzle, as well as a 1/2″ x 28 threaded barrel. You do have a few color options on the Elite barrels. It is likely the Universal Optic Cut will work with additional optics.  Features of the mounting system are the strongest, deepest screw placement in the industry,  direct optic mounting of multiple brands without intervening adapter plates, and extremely low optic placement permitting most optics to co-witness with typical iron sights. 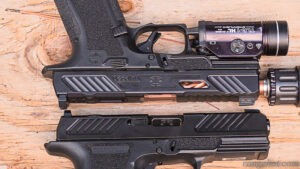 The slides are 17-4 PH stainless steel Nitride coated, but the Elite has reliefs machined into the slide and windows exposing a portion of the barrel.  Both feature aggressive angled cocking serrations. As expected, an accessory rail is integrated into the dust cover. 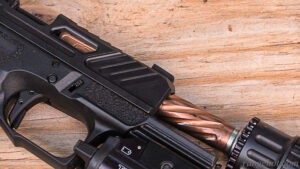 The barrels on both models are match grade 1:10″ conventionally rifled 416R stainless steel and feature flutes. The principal with the flutes is they provide an area to hold lubrication and for fouling to be trapped, away from moving parts. The rifling will allow using of lead bullets without issue.

The pistols ship with two fifteen round MagPul PMag magazines, as reviewed here. During the review, I tried the seventeen round PMags and factory Glock magazines and all proved to be reliable. Also included are three interchangeable backstraps that not only change the thickness a little but also change the grip angle, and a magazine well that installed easily. Even though this is a polymer-framed striker-fired pistol, you do have some customization options with the guns. Lastly, a take-down tool and range bag round out the accessories. 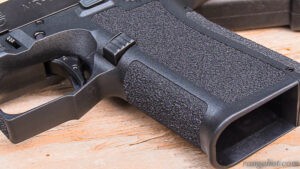 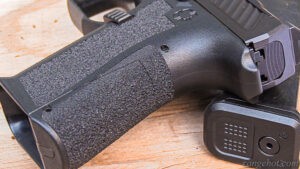 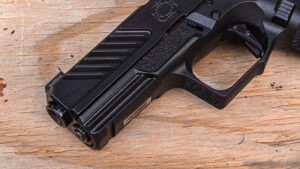 The front strap, backstraps, and grip area are nicely textured, couple that with the double undercut trigger guard, deep beavertail, and textured ledges for your strong and support hands, it is quite easy to get and keep a solid and comfortable purchase on the pistol. The magazine release is serrated and extended which works well in getting the magazine released, but if you have large hands or less than ideal grip on the gun, you may inadvertently depress it. Thankfully all Glock Gen 3 and some Gen 4 parts interchange, so that is an easy swap if you find you need it. Out of everyone that ran the gun, only one shooter had that issue once and he has bear paws and the grip strength of the same. The trigger broke just over four pounds, which is about as light as I would want to go on a carry or defensive gun. 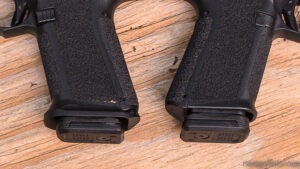 On the left, you see the magazine well installed, with still enough floor plate from the PMag to seat it. The factory Glock magazines have less of a floor plate and fit a little more flush. 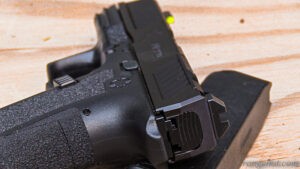 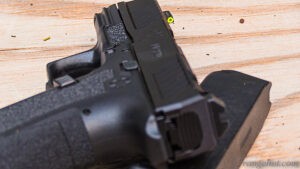 The metal sights are excellent, with a standard U notch serrated rear. The serrations help cut down on any glare when shooting in bright light and there was enough of a ledge to rack the slide off a table ledge of your belt. The front sight is a bright green AmeriGlo night sight. For a defensive pistol, I strongly prefer the one dot set up like this. You can focus on that one dot without any dots on the rear sight confusing you under stress, but that single dot is there to contrast against a black rear sight, so you still have an easy frame of reference where that sight it. This is a much better set up than no dot sights and somewhat better than the three-dot setup. 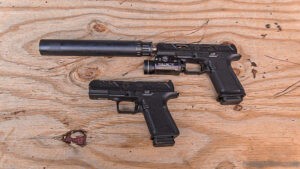 The sights were high enough to use with a silencer without having to go to those goofy silencer sights. Because of this the MR 920 will fit in Glock 19 holsters. 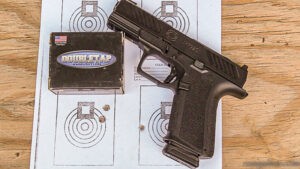 Accuracy was good, averaging around 2 1/4″ three-shot groups from a rest at twenty-five yards.

Three shot groups from a rest at twenty-five yards

Shadow Systems got their start customizing Glock pistols and developing aftermarket parts for such endeavors. After some R&D it seemed the next logical step was to introduce a pistol featuring the more popular upgrades and custom work, the MR 918. After a year and quite a bit of success with that model more changes were brought about and the MR 920 was introduced. The premise behind the pistol is instead of buying a box stock Glock and doing the upgrades it would be easier and less expensive to start out with that upgraded gun and if over time you wanted to make changes you could, but you have a solid the platform to tweak, if you see fit. The two different models, the Combat and Elite share quite a bit of overlap but enough differences to warrant the two pistols, so you have more options to go with depending on what you are looking for. After a total of about 750 rounds downrange, with about 450 being through the Elite, there were zero malfunctions. I also ran the Elite with the Liberty Suppressors Infinity X, review here, and the Centurion, review here.  Adding the silencers did not affect reliability or accuracy whatsoever. Shadow Systems is located in Plano Texas so these guns are American designed and made, adding a bit of pride of ownership if you ask me. I am satisfied with these pistols to be completely reliable with a myriad of ammunition available today and plenty accurate for what you would need from a defensive or match pistol. If there would ever be such a thing as a semi-custom striker-fired pistol the MR 920 would fit that role. You should also check out the Shadow Systems YouTube page for a more in-depth look at these pistols. 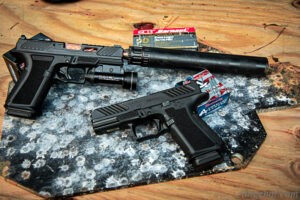 I got a lot of questions asking me to compare the MR 920 to the Glock 19, so Candy and I covered our thoughts via video. If you don’t want to watch the video the MR 920 has much nicer sights, better trigger, standard rifled barrel, more textured area, lighter weight, and easier to rack the slide over the Glock 19.

Can you shoot .40 S&W out of your 10mm Auto.
Rock Island Armory TAC Standard FS.