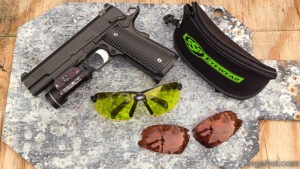 Getting old ain’t for sissys, I will tell you.

It was a number of years back I had to begin using reading glasses for fine print and such.  While it was a negotiable obstacle when it came to shooting, the front sight would be slightly blurry, especially in low light and indoor ranges. Thankfully many of my pistols, such as the Dan Wesson Specialist, have a bright dot on the front sight, and this did help, but still, in low light, I struggled with a blurry sight. 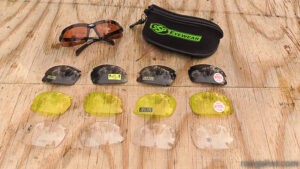 A few months ago, I got in the SSP Eyewear Top Focal Ultra Kit and some extra bifocal lenses with the magnifier in the bottom.  I mean to tell y’all this was a deal changer for me. After some experimenting, I found the top focal lenses worked best for me in shooting a handgun and rifle. However, the bottom bifocals worked great for me to use just as readers. The cheap $10 readers you get from the drug store will last a couple of months if you are lucky, but these shooting glasses have held up well with shooting or using them as readers. With only a small portion of the lens as a magnifier, you have an area of the lens with no magnification. 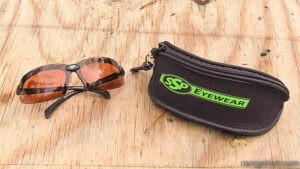 The lenses are quite simple to swap out, just bending the frame a bit and snapping out the lens and snapping in the new one. With readers, you will have some blur at a distance, but with these glasses, it is not as big of a concern.  The human eye cannot truly focus on but one thing at a time, so when you are focused on that front sight, as you are supposed to, the target will be a bit blurry with or without any magnification.

SSP Eyewear manufactures a myriad of different shooting glasses, so if you are in the market for some quality shooting glasses or, like me, require readers to see small print, it would well be worth looking into what SSP has to offer.