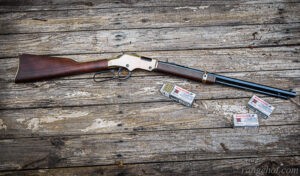 It was a few months ago I received the TALO El Dorado .22 lever gun to photograph for TALO. Once all that business was over I offered to do a review of the little rifle based on the Henry Golden Boy. I mean why not? It is a lever gun in .22, and I already knew how much fun that would be if I was given the OK.

Based on the Golden Boy the receiver, barrel band, and butt plate for finished in high polish rose gold, making it a very attractive rifle and very different than what you would normally see. 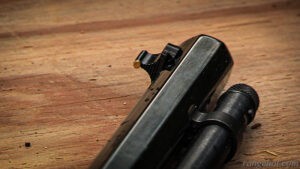 The front sight is quite prominent and incorporates a brass bead, adding a nice contrast to the rear sight. 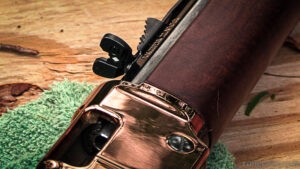 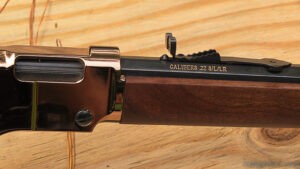 The rear sight has a generous notch with a white reference point at the bottom and is adjustable. 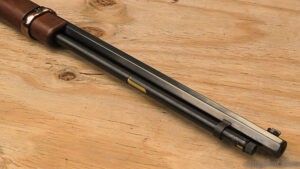 The barrel is twenty inches long and incorporates a sixteen shot tubular magazine. Incidentally, it will hold twenty rounds of .22 Short. 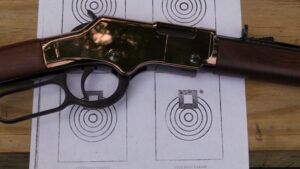 Accuracy was not bad at all with the best group of the day at about an inch and a half at 50 yards with iron sights from a rest.

The Henry 22lr Lever Action has a beautiful finish on both the wood furniture and metal hardware that invites everyone to appreciate the craftsmanship and detail that went into the aesthetic of the rifle. The lever actions smooth, consistent, and exciting operation brings tactile enjoyment to an already visually pleasing experience.

After the first few rounds, you want to keep shooting due to ease of operation, out of the box accuracy, and a feeling of nostalgia as your eyes gaze down the octagonal barrel to the color contrast accents of the front sights.

The Henry .22LR Lever Action is a rifle I hope to have in my collection in the near future. – Erik Jones

This rifle was one of the most fun reviews I have done in a long time, with about 1000 rounds total of .22 LR, a little .22 L and a couple hundred .22 S we had zero malfunctions. Since this rifle is based on the Henry Golden Boy, an already proven design I was not surprised at all. If you are in the market for a lever gun in .22 but want something a little different, this limited edition TALO El Dorado would be an excellent option. It is a very attractive rifle that would serve very well as a plinker, target rifle, and even a trainer. There is something remarkable about spending the afternoon with a few friends plinking with a .22 rifle, incorporating a lever gun adds a measure of cool factor to that.  The .22 Shorts were hardly audible but being a mechanical action and not a blow back reliability was not affected, so the .22 Short was my favorite to run through this TALO edition rifle.