By Hunter Elliott on April 15, 2013 in Product Reviews 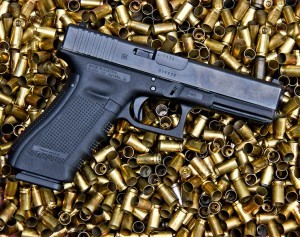 I hate Glocks and I hate 9mm Luger.

Well I used to hate them anyway. I so vehemently hated Glocks that a friend of mine bought one and I gave him so much grief every time he brought it to the range he wound up selling it so I would quit giving him such a hard time.

I used to tell folks I would rather have an old picture of a Colt than a brand new Glock pistol.

I had shot a couple Glock pistols and I was just not getting it so I embraced my hatred and went on with life blissfully unaware of what a fine pistol Glock really was.

Anyway, back to my stubbornness and how it failed me, I was at the local gun show late one Sunday and stopped by a friend’s table to run my mouth, look for some powder, and primers. It was then my life was fixing to change.

He had a brand new Glock Model 17 Gen 4 and it was priced to move before the end of the show. He saw me spying the pistol and knowing me as he did he did not even try to sell it to me. It was a Glock chambered in 9mm Luger, that my friend is two strikes right off the bat. I mean it was not a Colt and it was not a .45 Auto or 10mm Auto so what in the world would I want with it.

I had a little bit of money burning a hole in my pocket, I already had a good supply of 9mm bullets (I reload the Super .38), powder, and primers. I had picked up a few coffee cans of once fired 9mm brass, you know “just  in case”. How many times have you had those “just in case” moments?
Then it happened, I bought a plastic pistol. A friend of mine who was about arms length away almost fell out as he was sure I was joking even when I showed my permit.  I admit I was a bit ashamed but the pistol did not feel as bad as I remembered. 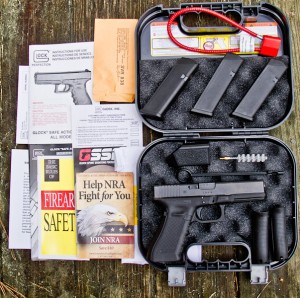 What was in the box. Along with the pistol and three magazines comes an awful lot of paperwork, a fired case, a magazine loader, cable lock, the extra backstaps (I talk about this later), cleaning rod, and bore brush.

I took it home and put it in a dark corner of my safe and tried to forget what had happened.  I am a believer that any firearm I own has to work and I had to be sure so the next pretty day I took a few handguns to the range and gave the new Glock a test drive.

Well it is not a beautiful pistol to be sure but, it worked and worked really well straight out of the box. I ran a few magazines through it and began to get used to that odd trigger. It is a long throw if you are used to a 1911 trigger but it does break very clean. Once you get the hang of it and find the point the trigger resets, you can run the gun pretty fast. Something else to think about is seventeen rounds in a standard magazine is nothing to disregard.  I had brought a few hundred rounds with me that day. For the factory rounds I ran a few magazines of Federal Guard Dog 105gr and Hornady 135gr Critical Duty with zero failures. I had also loaded about 200 rounds of 124gr Montana Gold JHP with 4.2gr of Unique. That is a pretty mild load for the 9mm and it run through all I had that day with zero problems.

One thing worth mentioning is the loaded chamber indicator. I usually don’t care for such a feature as it usually is a very awkward looking indicator but the Glock’s indicator is the position of the extractor. With a live round in the chamber the extractor can be felt just enough by it rising at the ejection port. I can live with that.

So, at the very least the Glock deserved another chance but did not deserve to be cleaned.

I took it out several more times, let my friends shoot it, let my Mom shoot it, and anyone else that wanted to give it a try all the while gently abusing it. It was getting pretty dirty (and “maybe” was dropped in the dirt a few time by “accident”) in the corner of my sub conscious I may have hoped for a failure. After 500-700 rounds I detail stripped it (also an easy procedure) and cleaned it. By this time it had gotten pretty nasty. The slide looked a like I had done a little light gardening with it.  A few more range trips and a few hundred more rounds and ol’ Hunter Elliott began a 180 and started to love that ugly plastic pistol with the odd trigger. 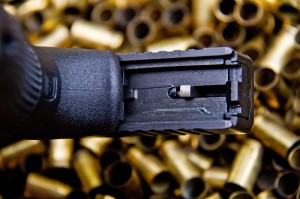 The bottom of the rear of the slide. You can see the striker fire set up. 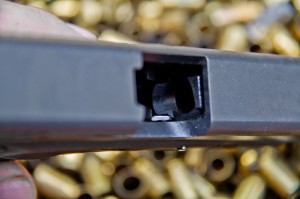 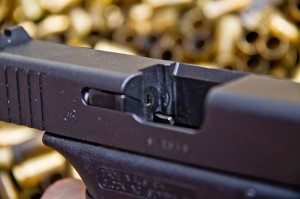 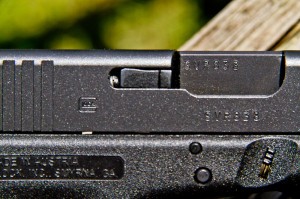 You can see the extractor showing unloaded. This is much more evident in person. 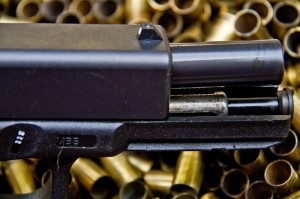 You can see the barrel tip up with the slide locked back as well as the new recoil system. 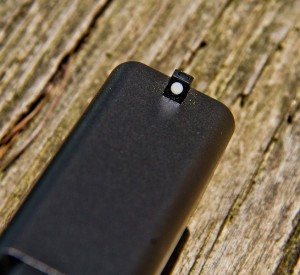 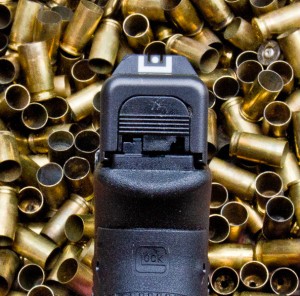 The factory sights worked great, I really dig this set up. 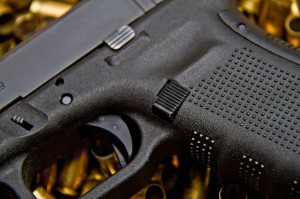 You can see the enlarged magazine catch and the only thing I really did not like about this pistol, the slide stop. It was not designed with a ledge for your thumb to drop the slide on a loaded magazine. Glock recommends the “sling shot” method which I do not care for. This and a few other changes will be addressed in an upcoming article I am putting together on some changes that makes the Glock an even better carry pistol for myself. These will be just my opinions though. You may be content with the factory set up. 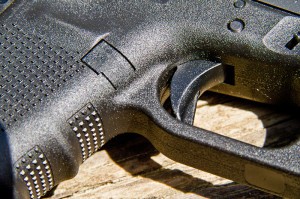 Here you can see the other side of the magazine catch, allowing to revers it if you are a southpaw. 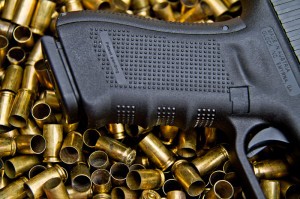 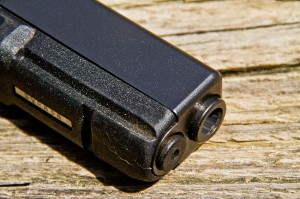 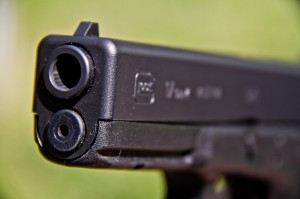 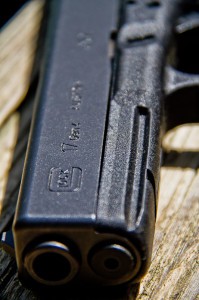 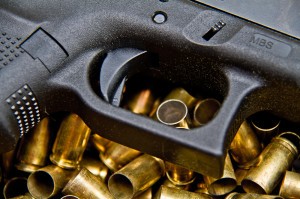 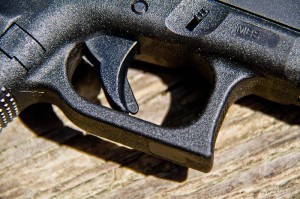 The trigger, also showing the only active safety on the pistol you also have two other passive safeties, a firing pin and drop safety. You can see the little lever in the middle of the trigger face. That serves to block the trigger unless it is depressed along with the trigger. It may not sound like much but it does work. Besides the best safety you have is between your ears. The first photograph the trigger is not cocked, the second photograph it is. 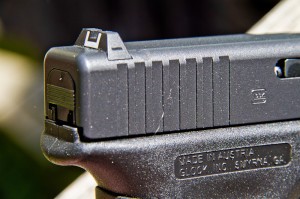 Rear cocking serrations, plenty enough to aid in gripping the slide when chambering a round. 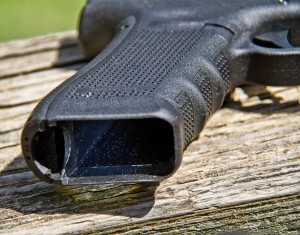 The magazine well, generously beveled and enough of it to make magazine changes much easier and faster. 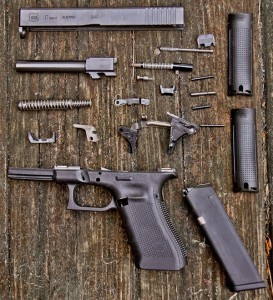 Accuracy test shot from a rest at 25 yards

These rounds were shot by me from a rested position. I consider myself at least a proficient shooter so in my opinion this will represent real world average accuracy shot with factory ammunition and a common reload.

I am around the thousand round mark without a failure and only one cleaning (somewhere close to half way through). The majority of the rounds fired were my reloads but there were right many factory rounds run through as well. To me the cost of this pistol is inexpensive for what you get. A reliable accurate sidearm. It is not something you will take out to show off to your friends because near ’bout everyone has seen one and it is not  going to win any beauty contests.

In my mind I will always pick function over form so the fact it is a very reliable and accurate pistol greatly out weights it’s look. The Gen 4 offers a few changes from the previous Gen 3.  Glock now includes 3 factory 17 round magazines instead of two. It also has a new duller finish, grip pattern (somewhat more aggressive than the previous generations) and, larger reversible magazine release. A new recoil system is also implemented. A cool feature is interchangeable backstraps.  You can run the gun with no added backstrap and get the same grip size as the Gen 3 SF model, the medium backstrap is 2mm and the equivalent to a standard Glock 17 grip and the large backstrap adds 4mm.

Bullet technology has come a long was as has the 9mm Luger round. With good quality modern defensive ammunition is can be a very good choice for a defensive round. This will be elaborated on when we get to the 9mm Luger ballistic test but suffice it to say the Hornady line of ammunition is always a great choice. I have even carried this very pistol often (which if you know me is tough to believe) and believe it to be a fine defensive pistol.

15 Responses to The Glock 17 Gen 4, Function over Form