By Hunter Elliott on August 5, 2015 in Product Reviews

Magpul Glock PMag 17 GL9  magazines, is it live or is it Magpul

I spoke to Magpul at the 2015 SHOT show and really wanted to try out their new PMag 17 GL9 for the fullsize Glock 17. They also offer PMag 15 GL9 which is a flush fit for the Glock 19. Now the PMag 17 GL9 is compatible with all double stack 9mm Luger Glocks but does protrude a bit from the compact and subcompact.

The magazines were released and shortly after Magpul volunteered to recall them due to minor feed issues on the G19 and G 26. The full story can be found on their facebook page. They were very good about it, got the issue corrected and made good with the folks who bought the first generation. I got a couple of updated magazines in the mail in the beginning of July and pressed them right into service. 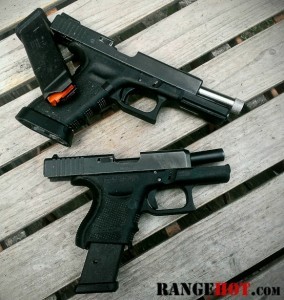 I took both magazines out and ran them through my Glock 17, with a Lonewolf barrel as well as the factory barrel and a Glock 19, and a Glock 26, all factory. After running each magazine several times without issue from either pistol 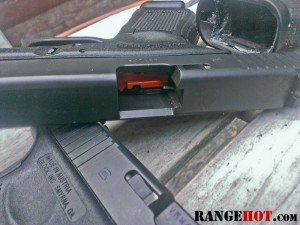 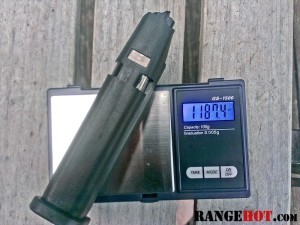 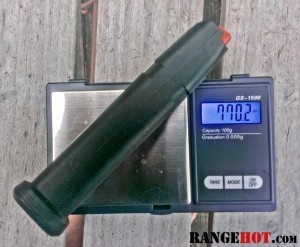 I took some measurements and weighed them. You can see the 17 GL9 weights 770 gr and the factory Glock magazine weights 1187gr, a difference of 414 gr. I did make a math error on the video while trying to add the difference in my head.

I loaded one magazine full and left the other empty and let them sit for a month to see if any problems will show up, periodically taking them out and shooting them, and reloading each as they were before. You can see the 17 GL9 on the right has the same ambidextrous cut as the Gen 4 Glock magazines, so if you are a southpaw and have switched your magazine catch around, the Magpul PMag 17 GL9 will still work with your pistol. 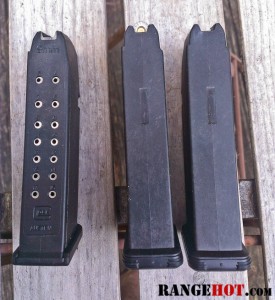 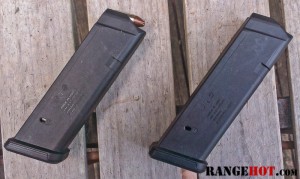 The 17 GL9 does not have the witness holes as the factory Glock magazine but it does have a single witness hole at the bottom right. When you see your brass in the window you know the magazine is loaded to capacity, as denoted by the 17 beside the window. 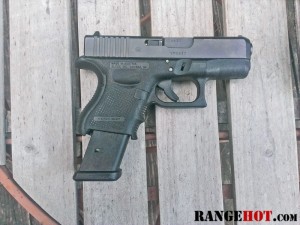 Here you see how far the 17 GL9 sticks below the receiver of the Glock 26, Gen 4 but function was just fine

If you are looking on stocking up on magazines for your double stack Glock pistols, be it the 17, 19,or 26 and are on a budget the Magpul PMag GL9 is a viable option. Proving to be as reliable as factory magazines, a shade lighter, and about half the price to me it is worth giving them a try. You will notice in the video the PMag 17 GL9 dropped free from all of the Glocks, even when empty. Though I have only been testing them about a month with about 350 rounds through both, one with about 100 and the other about 250, so far I have experienced any issues. I will continue to leave the one loaded and carry and shoot them on a regular basis and will report back from time to time. The fact the GL9 has a little thicker base pad, it worked will with my Glock 17 and the shallow magazine well I use to speed up my reloads, though the current magazine extensions do not work with the PMag 17 GL9. I believe Magpul did well with this one. For the review on the Magpul PMag 15 GL9 please follow this link.

8 Responses to Magpul PMag 17 GL 9 Glock magazine, is it live or is it Magpul