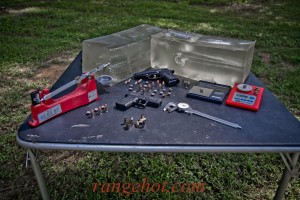 The 380 Auto was developed by John Moses Browning. It was added to the Colt Pocket Automatic in 1908 and introduced in Europe by FN in 1912. FN designated the .380 Auto as the 9mm Browning Short.

The 380 Auto has been adopted by several countries in Europe as well as Sweden and Czechoslovakia as a military and police sidearm cartridge. It was used in World War II by German soldiers in the Walther PPK and Italian soldiers in the Beretta M1934.

As a service round the .380 Auto’s performance was not ideal. Compared to other pistol cartridges such as the 9mm Luger and .45 Automatic it  lags behind in stopping power. Truthfully any handgun cartridge is not ideal as a defensive round as compared to most any centerfire rifle cartridge. The primary reason the 380 Auto has remained so popular is the fact it is a small cartridge that can be chambered in small and light handguns for concealed carry. As a primary or backup cartridge it is surely better than harsh words.

Many do not want to carry a large and/or heavy handgun everyday so they either opt to carry a small light handgun or not carry at all. Not carrying at all would not be the best choice in this. Keep in mind I am referring to citizens who are legally carrying a pistol.

With the great improvements over bullet design in the past several years the .380 Auto is a much more viable choice now than when it was introduced. At least that is what I have heard so Jason, Tom, and I decided to set out and see what was what. The proof is in the pudding (or the ballistic gelatin in this case) so we set out with a few pistols, two blocks of ballistic gel, a chronograph, and some ammunition to figure it out. 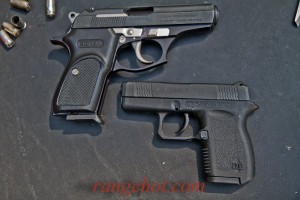 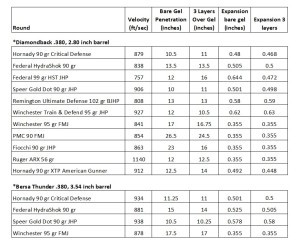 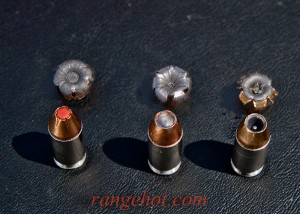 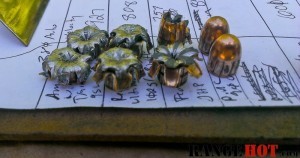 Left is Hornady American Gunner, Middle is Ruger ARX, and Left is Fiocchi. The top bullet was fired through bare gel, and bottom through 3 layers.

You will notice that the Diamond back with the Speer Gold Dots penetrated deeper than the Bersa did with less velocity through cloth. We thought that odd and ran that test again and got the same results. Our theory is since the Gold Dot from the DB was traveling on average 33fps slower the bullet expanded .077″ less. Since there was less expansion there was less surface area offering resistance in the gel the bullet penetrated deeper.

With this information it shows the .380 Auto is a viable defensive cartridge with modern ammunition. Would it be my first choice, no. With that said it would be much better than harsh words. It has been said time and time again a .380 Auto in the pocket is much better than a .45 Auto in your safe at home. 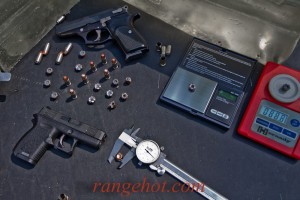 I would like to thank the following for their assistance with this article:

Go LITE with the 2A Armament Balios Lite receivers and rails.
.380 Auto pistol vs carbine