By Hunter Elliott on March 25, 2015 in Gun Talk, Product Reviews

Advanced Holster, keeping your sidearm securely at your side. 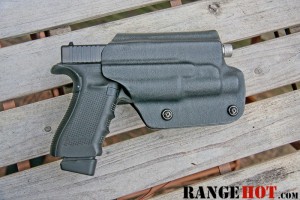 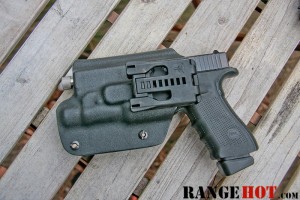 I have been shooting a few action pistol matches and one of my favorites is at Range 37. Brent, the owner of Advanced Holster  also shoots at Range 37 and generally we catch up and talk guns and such in between stages. Waiting for our turn to shoot I was complaining about finding a quality Kydex light bearing holster for my match pistol, a slightly modified Glock 17 Gen 4, running a Streamlight TLR-1 HL light and a Lonewolf threaded barrel. I have looked at a few around but just was not thrilled with the fit. My SOP was running my concealed holster, attaching the light before the stage, and hoping my gun did not go down and needed to be secured. Brent, as if well practiced, hands me his card and tells me he can make me just the holster I need. At this point I had mixed emotions, I was glad to have Brent on the job, but damn it, I would have loved to know this a few months ago.

We got a plan, and he told me he would custom make a holster that would work with my pistol and also accommodate the Lonewolf threaded barrel I like, and he would bring it to the next match. I know it sounds petty but I like my gear to be squared away and not having the holster I needed was putting a large burr under my saddle. 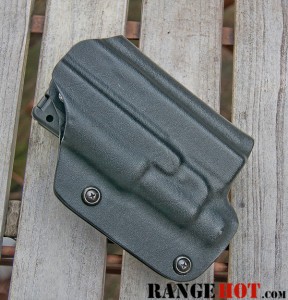 When I showed up to the next match there was Brent, and as promised, he had exactly what I needed, and met me early enough so I could use it when my turn in the shoot house came up. At this point Hunter was a happy camper. 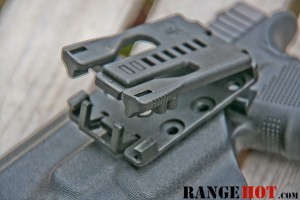 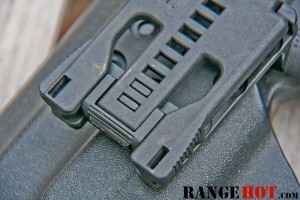 This particular holster came outfitted with a Blade-tech Tek-Lok but it can be changed to fit any commercial belt attachments including Safariland and Blackhawk. On this holster there is no cant, and I prefer this type of match holster for drawing and shooting for retention. Also with no cant, you don’t break the 180 rule at a firearm match. 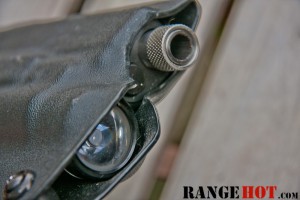 The holster fit my rig exactly as he said, securing on the light. 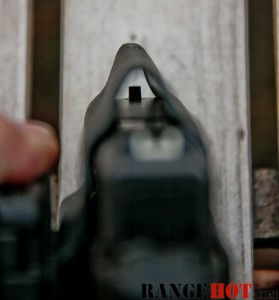 If you are running tall sights, like silencer sights the holster is cut to accommodate them. 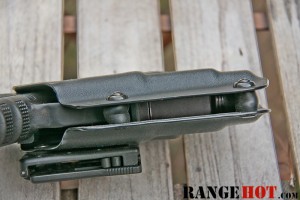 I have had the holster a few months now, shot several matches, used it in a few classes, some I took and some I taught. It has held up well without showing any signs of wear, which is good because they have a lifetime warranty.  This holster would not be ideal for low profile concealed carry, but under a light jacket or better it works great for a carry holster. If open carry is more your speed, then you would be well suited with any of the Advanced Holsters as they make and carry a large selection of Kydex holsters as well as magazine carriers and other gear. Also, if you need something specific and don’t see it listed on the website contact Brent and I expect he can help you like he did me.

Here is a short video of the holster in use.

Overall, I am well pleased with my holster from Advanced Holster as well as Brent and how he operates his company. I like the fact you options when you deal with Brent and he is a good shooter himself so he has an understanding of what is required of his gear. I will continue to use this holster and report back from time to time. Next I am thinking I want one of his magazine carriers.

Stove Pipes and Double Feeds: Is it your grip?
Get a grip with AlumaGrips, replacement grips for handguns