By Hunter Elliott on April 14, 2015 in Product Reviews

Colt Combat Elite, what was old is new again 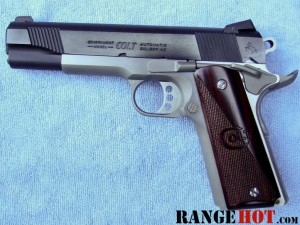 My first handgun was a Colt enhanced Combat Elite; I bought it at the Post Exchange on Camp Lejeune shortly after I turned 21. Now I have picked up the new Colt Combat Elite test pistol to see how they compare. I am digging the new style stocks. 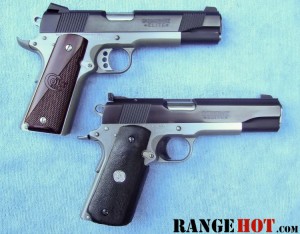 The new Combat Elite is based on the Colt XSE (a tried and true pistol), but without the ambidextrous thumb safety and with an added, upswept grip safety. I picked up the new Combat Elite on a cool Thursday afternoon. The first thing I noticed was the slide to receiver fit was tight, real tight. The current Combat Elite receivers are being built on CNC machinery. This may be part of the reason for the consistency. I decided to be open minded about this new fangled computer machined Colt. 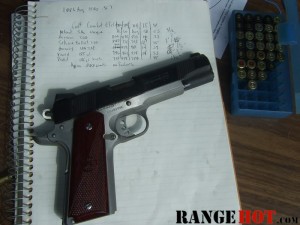 Normally I would have waited until the weekend to try out a new test pistol but there were enough reasons for me not to wait. I went to a place in the country closer than the range just to put a few magazines through the Colt and see how it acted. I stepped off about twenty five feet and satisfied my curiosity. After a few flawless magazines of Armscor 230gr ball rounds the sun was going down and it was suppertime. 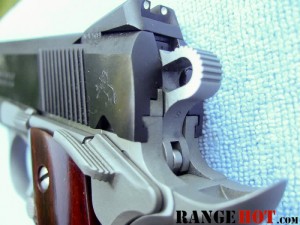 The hammer is a combat style. 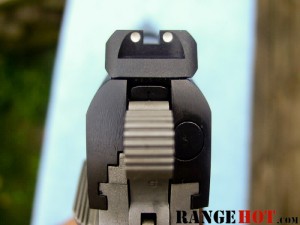 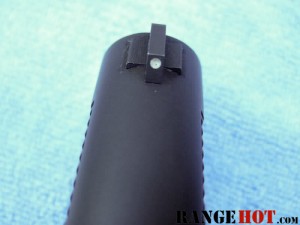 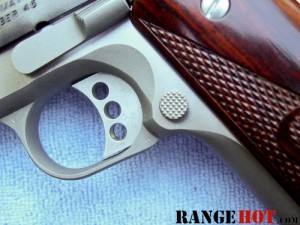 The trigger is an aluminum three-hole style with an overtravel adjuster. It broke clean about 5 pounds with little take up and overtravel. 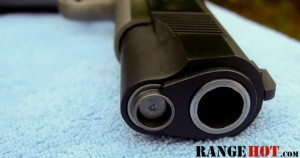 The muzzle showing the full-length guide rod setup. The foreward cocking serrations added an option on hand position for racking the slide. 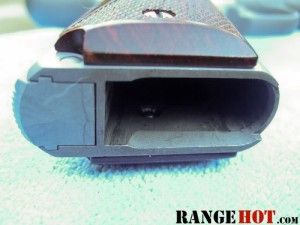 The magazine well is slightly beveled. 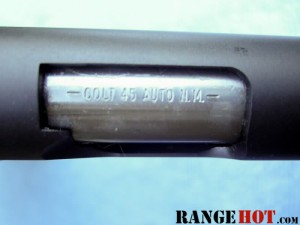 The barrel hood denoting the National Match barrel in .45 Automatic.

The checkered magazine release provided a good purchase when dropping the magazine. 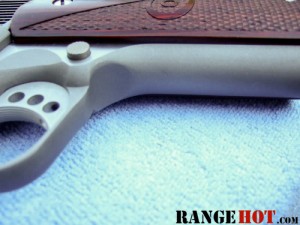 The front strap was smooth and showing the cut under the trigger guard on the Enhanced receiver. 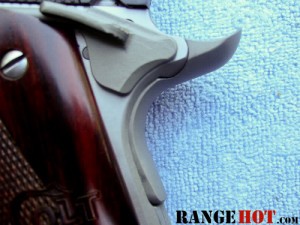 A close-up of the feed ramp and barrel throat. 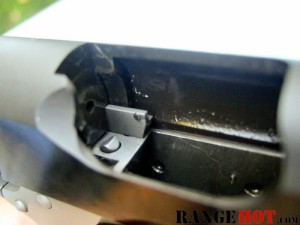 A close-up of the breechface and ejector. 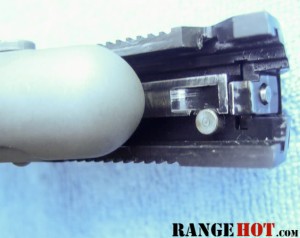 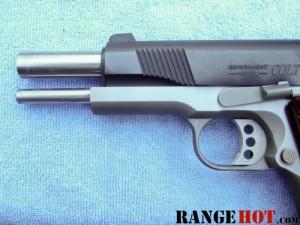 Slide locked to the rear, showing the barrel and full-length guide rod. 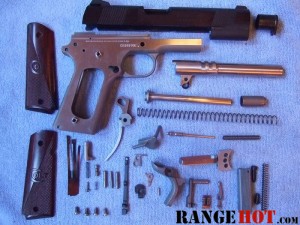 The new Colt Combat Elite comes standard with a full length guide rod, so detail/field stripping is a little different than a standard Government Model with a short guide rod I found it easiest to remove the slide as an assembly. Then remove the barrel bushing the same way as a standard Government Model, pull the recoil spring plug and recoil spring out from the muzzle. Then the full-length guide rod can be removed by pulling it up and back toward the lower barrel lugs. After that, detail strip is as any other Government Model.

I am not going to count the first range trip really because it was just a basic test of function of the pistol. That is my excuse for not waiting to try out the new Colt.

I started the Combat Elite at the twenty five yard line to get a feel for the pistol and get the velocities of the test rounds. I ran a magazine of each test round with no failures then backed to the twenty five yard line for accuracy. Once the work portion of the test was over, Clint (a close friend of mine) and I began to wring out the new Colt and see how it would do.

For magazines I used the supplied eight-rounders, as well as Check-Mate seven and eight-round magazines with the dimpled follower and hybrid feed lips.

We took turns changing ammunition and magazines (even mixing lead semi-wadcutters, jacketed hollow points, and full metal jackets in the same magazine) and after approximately 200 rounds there were no failures. Clint commented on the visibility of the sights. As for myself, so far I liked the new Colt all the way around.

I took my mother out on a pretty Sunday morning to continue the test on the Combat Elite and to get her some more practice with a Government Model. I ran into Gary (a member of the range where I shoot) and asked him to try out the new Colt. He ran some of his rounds through the Colt and had no troubles. He told me he thought the fit and trigger on this model was better than some of the older Colts he has tried.

He was then good enough to donate some of his reloads for me to try through the Colt. His reload consisted of a Mt Baldy 215gr LSWC with a large meplat loaded with 6.1gr of Unique in a CCI case with a CCI primer.

The test rounds were staggered as before, mixing in jacketed hollow points and lead semi-wadcutters with the full metal jackets and, as before, it seemed the Colt did not care what round I used (including empty cases). It feed everything smooth as glass.

With just over 400 rounds through the tube without cleaning or lubricating, I was satisfied on how the pistol ran. 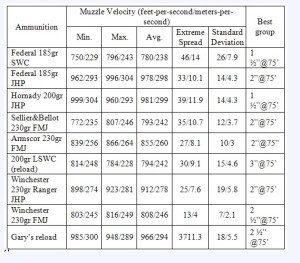 My reloads consisted of my home-cast 200gr LSWC loaded with 5.3gr of Unique. The mold used was the Lyman mold 452630. Brinell hardness was 19.3 from water quenched wheel weights and lubed with Lyman Alox lube. Cases were Winchester, Federal, Armscor, and CCI using Winchester primers. 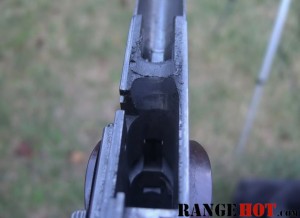 The test was done without cleaning or lubricating to see how the new Colt would fair with a small amount of neglect. The lead bullets with a soft lube and Unique powder tend to accumulate around the feed ramp and chamber after a number of rounds.

I tried to get several opinions from dealers as well as friends on this pistol and, of those that checked it out and/or shot it, everybody agreed Colt did a good job overall building this pistol.

This test brought back some memories for me of when I shot my first very own Colt. I have collected a small number of Colt pistols since my first one and have been happy with all of them (though some get shot much more than others). With this being the latest Colt I have shot, and being built in a somewhat different way, I can still say I liked it. It is no secret I am a Colt man through and through, but I give you my word I was objective on this test. In my mind it would be doing the reader and Colt a disservice to pad the review or ignore any problems.

If something was to cause a problem let’s make the consumer aware before they buy a problem pistol and hold that against Colt. With the same idea, let’s make Colt aware so they can correct it so as to not upset the consumer. I believe it is in all of our best interest to be honest and objectionable.

All in all I was really happy with the way this Colt functioned.