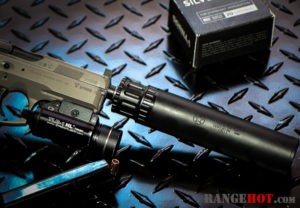 That adds a great deal of versatility to this silencer and, with silencers being a NFA item requiring the $200 tax stamp and lengthy approval time, buying one can that could serve you on several firearms just makes good sense.

I received the test sample and began to take a hard look at it. Thankfully it is user serviceable with a monocore baffle stack, It is a little shorter than I am used to seeing, which makes it a bit more handy.

Other Liberty boosters and adaptors are compatible with the Centurion, so if you already have end caps from Liberty you are ahead of the game. 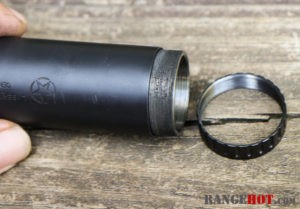 The locking ring that holds the monocore baffle in place. 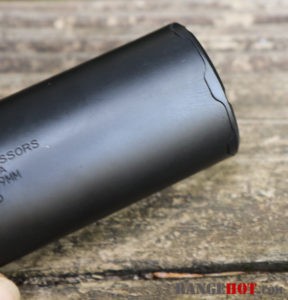 The baffle stack indexes into the outer sleeve.

Silencers are undoubtedly cool and can serve as excellent training aids to people who can be report sensitive. With the added muzzle weight it does change the balance of your host handgun but that helps dampen perceived recoil and muzzle flip. Something about the Centurion is, it is bit shorter so it does not disturb the feel of your pistol quite as much as a larger can so that would make it an ideal accessory for home defense. God forbid you hear that famed bump in the night, there is no chance you will be digging around for eye and ear protection, and if you have family that is even more true. Discharging an unsuppressed handgun indoors is zero fun and could lead to hearing damage. Now of course we would sacrifice a bit of our hearing to save a life but it sure would be nice to defend yourself and not even disturb the neighbors. I am a firm believer in silencers on defensive guns, for the sole reason of protecting the hearing of yourself and loved ones if you ever did have to deploy your defensive handgun. With the Centurion being a bit shorter it makes it a natural choice for that defensive firearm. The same goes true for a defensive carbine as well, which many people favor for home and self defense as well as taking a carbine on the road for protection. I ran the Centurion on the CZ-P01 silencer ready, CZ-P09, Barnes Precision Machine Patrolman’s rifle in 300 Blackout, Just Right Carbines 9mm carbine, and Kel-Tec CMR-30. The silencer functioned well on all hosts and around 500 rounds has held up very well. 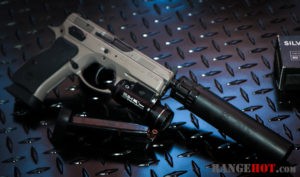 This unit comes standard with a 1/2-28 booster assembly installed. All of the Mystic X mounting solutions are compatible as well.