By Jimmy Ogletree on December 2, 2015 in Gun Talk, Product Reviews

I recently built an AR15 that I planned to use at work, and for this reason, I wanted a rifle that was as ambidextrous as possible without spending hundreds for the specialty receivers. So my research started, and I knew I wanted something simple, as I am a die hard subscriber to the KISS method in life….Keep It Simple Stupid. I found many different parts, but nothing was simple, except for the Norgon Ambi mag release. Norgon graciously sent over one of their mag releases and was blown away by it upon first sight. 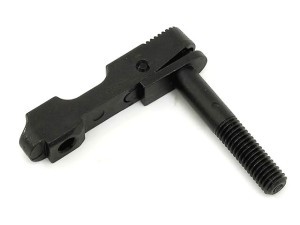 The design was very simple and to the point. Add a pivot point, and a spring on the mag catch that sits on the left side of the rifle. The best part of the design, is that it all is covered by the receiver when installed, meaning that there is less chance of dirt or debris getting into the moving parts and making it non operational. I was able to toss this rifle into some sand dunes in North Florida (yes they exist) as well as some beach sand, and never had one issue with the Norgon failing to work. The install is the same as a standard mag catch/release, so I wont waste time on that. 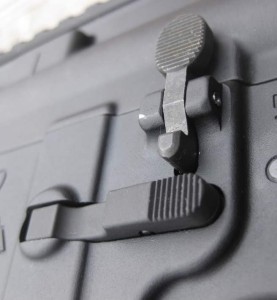 When I got to using the new ambi release, I also installed an Odin works XMR2 (check the review on this item as well), of which made this mag release and catch system best I have used. I found the the spring in the Norgon catch, was heavy enough to prevent the mag from releasing if the rifle were dropped, or by accidentally putting pressure on the magwell area. With a little Tacticool practice in my Tacticool speedo and bungee cord plate carrier, I was feeling like an operator operating operationally. OK for real though, it was a much need addition to the rifle, and I found myself putting them on all of my rifles.

Now, the only issue I had with this product was not the products fault, as I also ran a Magpul BAD lever, and the space between the two was minimal, since the Norgon was thicker, it did have a larger overall height that stuck out of the receiver by a smidge. If the BAD lever didn’t have as much wiggle as it did, and would stay in one place (also fault of the bolt catch) then everything would fit better than a thanksgiving meal in your stomach.

Overall, this product is a bit pricey, but it well worth the money that you will spend on it. I do know that this item will be on my rifles for many years to come. The only thing id like to see if them offered in different finishes.

Jimmy is a southern man, raised in a military family with over 24 years of firearms experience. He has worked in the security and Law Enforcement field for over 10 years, many of those years were spent in a car for 13 hours a night on patrol. He is also a former investigator for the Department of Defense. Jimmy is an NRA certified instructor, as well as a Florida Security Officer School Instructor.
View all posts by Jimmy Ogletree →

One Response to Norgon Ambidextrous Magazine Release for the AR15.