By Hunter Elliott on December 27, 2018 in Product Reviews

It was a couple of months ago I received the RIA/Armscor VR 80 12ga shotgun for review, and after about 200 shells downrange without issue, this is what I have learned. 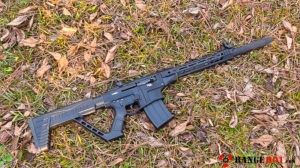 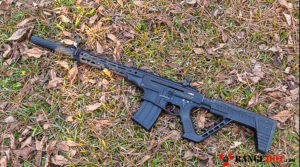 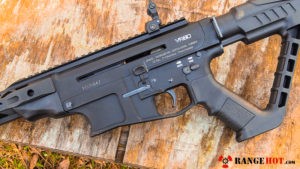 Here you see the bolt catch and the left side of the ambidextrous safety.  While the pistol grip looks a bit funky, it does classify as a thumb hole stock allowing this long gun can be shipped to the less free states. 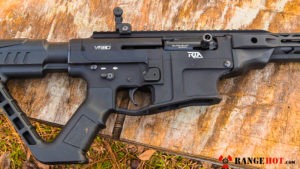 The magazine catch and other side of the ambidextrous safety. The trigger broke at eight pounds with almost no take up but with right much over travel. You can see the portion of the Picatinny rail above the receiver. 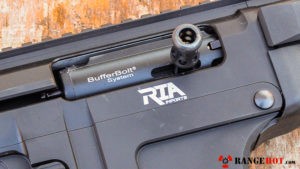 Here you see the charging handle located on the bolt, which worked quite easily and can be reversed for those who are left hand dominate. 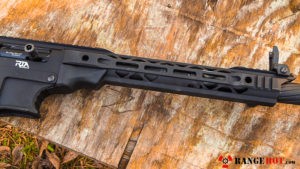 Notice the portion of Picatinny Rail at the top and side of the handguards, as well as MLoc on the port and starboard sides. 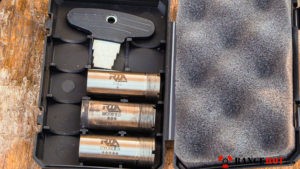 Full was 16 inches from side to side measured from the furthest shot. Modified was 21 inches and Cylinder was 27 inches.

Understand your results may vary from these depending but it will give you a good idea of spread and accuracy.

The VR 80 is imported by RIA from a company called Derya, who makes a similar shotgun called the MK12. Throughout some 200 shells, it was reliable with the gamut of 2 3/4″ and 3″ shells I ran through it. Being gas operated recoil was somewhat lessened over a pump or break action shotgun, and with some range time and correct technique, it was not hard to control during live fire. Coming from RIA with flip-up iron sights mounted to the Picatinny Rail along the top and MLok machined into the handguard, the VR 80 can be configured to suit whatever your needs are, be it home defense, self-defense, range use, or match use.  Maintaining the shotgun is pretty simple, by unscrewing the barrel shroud and removing a hex head screw at the base of the bottom of the handguards you can remove the handguard. Once that is done it field strips similar to an AR-15 with the takedown pins. At that point, the bolt can be removed.  All in all, I am satisfied with the VR 80 as a reliable shotgun that would serve in a plethora of applications.