By Hunter Elliott on September 17, 2016 in Product Reviews

Speaking with a few friends at the Ruger booth at this past NRA show I was able to get a close up look at the new Ruger Silent-SR and I immediately asked for a test sample, and Ruger was good enough to oblige and my review of the Silent-SR began. 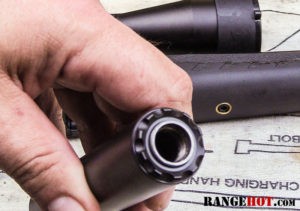 The 1/2×28 threaded end. You can see the knurles the tool meshes with to disassemble. 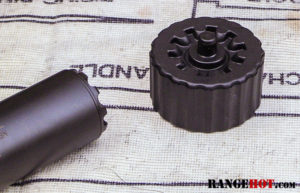 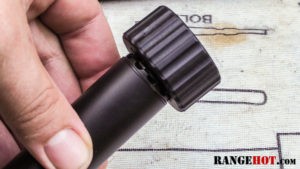 The supplied take down tool. 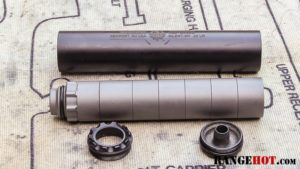 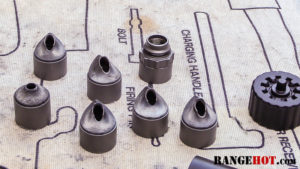 Disassembled, you can see the baffle stack. 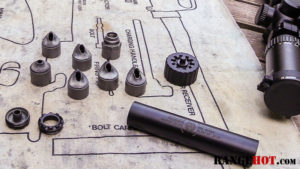 Ruger is known for quality, and I believe the Silent-SR is no exception. Having ran about 500 rounds of subsonic and supersonic .22 Long Rifle as well as about twenty or so .22 WMR ammunition through it there were no issues. I did clean it after the review was over, and it should have cleaned it about midway. It was mostly lead rounds I shot through the can and it was plenty nasty when I did get around to cleaning it. Using the Ruger 10/22 Takedown Lite, which you can read that review by following this link, Ruger 22/45 Lite and the Kel-Tec CMR 30 and you can read that review by following this link as a host there was no accuracy changes with or without the silencer installed. I have been a fan of Ruger for a long while and I am glad to see them expanding into other markets. Silencers are becoming very popular, as they should be. Not only serving as excellent training aids, they are a lot of fun, and add a bit of safety to shooting. When I say safety I am speaking of suppressing the report of the firearm.  You will notice in the video I was using a sound meter and it should be noted, after speaking with the manufacture of the meter, my meter measures the entire sound wave not peak sound. That is a more accurate representation of what the average human ear hears of the report. I find this to be a valuable number so people can have a good idea how this can would sound to their ears. Ruger did a nice job with this can and honestly only one thing stands out to me, I prefer monocore silencers while the Silent-SR uses a baffle stack. Some folks, who are smarter than I, have told me baffle stacks are a bit more efficient in suppression than the monocore but they are also more difficult to clean. I cannot swear that is gospel but worth considering. All in all I am well satisfied with the Silent-SR and if you are in the market for a rimfire can, it is definitely worth considering.

4 Responses to Ruger Silent-SR, Ruger’s intro into the silencer game.