By Hunter Elliott on September 20, 2016 in Gun Talk, Product Reviews 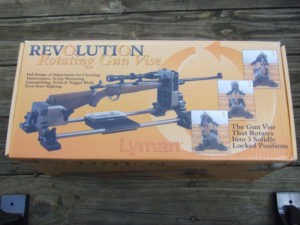 Lyman Revolution Rotating Gun Vise
I unpacked the contents to see what this new vise is all about. 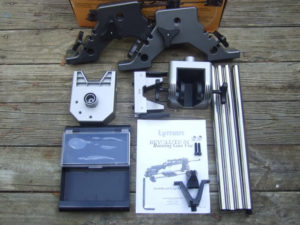 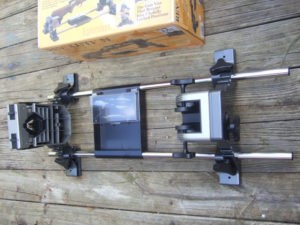 The assemble instructions were very straightforward. The vise was easy to assemble and though I was glad to have the directions it was simple enough to figure out just by a picture.

My Colt HBar AR15 gives me the most trouble when cleaning so that will be the rifle I use to test the vise with. The rifle fit securely in the Lyman vise. The vise’s butt assemble holds the rifle stock by utilizing two adjustable, opposing knobs. As you adjust the knobs, the padded ends snug against rifle butt and hold it fast. The forearm body supports the rifle at the front and the forearm cover adjusts down easily also padded to prevent marring of the finish.  The vise can also rotate about 45 degrees either way to change the access angle. Back out the two spring loaded knobs of the butt assemble and forearm body. Grab the butt assemble and forearm body with both hands and rotate in the direction you desire. 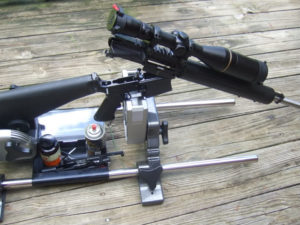 The forearm rest can be adjusted to position an AR style rifle to access the breech. 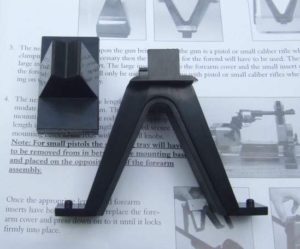 For cleaning pistols and revolvers there is an insert to take up space in the forearm body. 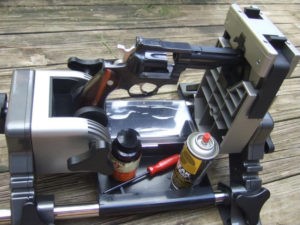 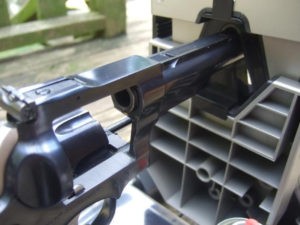 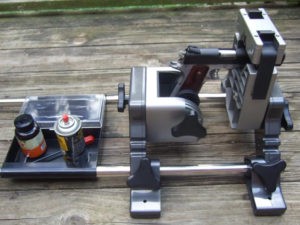 The Lyman vise can also be adjusted to hold a Government Model or similar autoloader in place.

I used the Lyman vise to clean a Colt HBar and Ruger Redhawk and it did a it’s job well, holding the firearm securely. The removable tray was handy for keep cleaning solvents, tools, and parts close at hand.
With the ability to rotate the firearm is three positions you have more flexibility than static cleaning vises.
It is light enough (about 7 1/2 pounds) so it is not a problem to disassemble and transport but the legs have holes pre drilled if you opt to mount the vise securely to a bench.
It measures approximitaly 36″ L x 7″ W x 16″ H.
There are also slots on the mounting bases to keep your cleaning rod handy, this is a good idea especially for the cleaning rods that do not disassemble.
There is more gun vises on the market now than you can shake a stick at and many of them work well.
The problem I have seen with some is they double as a shooting rest, while this does add to the versatility of the tool it may compromise somewhat on both ends.
When using a rest to shoot from I like a true bench rest and when using a gun vise I want it to be secure.
I have a couple of the gun vises/rests in my closet I use from time to time but for cleaning and maintenance I believe I prefer Lyman’s idea.
I want to thank Lyman for giving me the chance to check out their new vise.
If you have any questions about the Lyman gun vise please ask and I will do my best to get you the answer or point you in the right direction. I see them selling for about $65, so they are not terribly expensive.