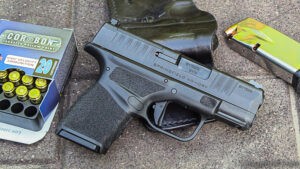 After Candy expressed her disappointment on the Springfield Hellcat, I thought it would be a good idea to form my own opinion. Not that I doubted Candy as she is an accomplished shooter and knows her way around a firearm, but I wanted to spend some time with the pistol myself. 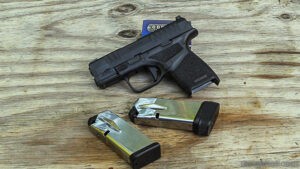 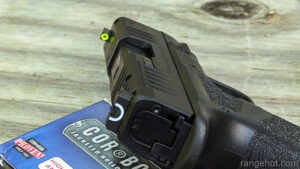 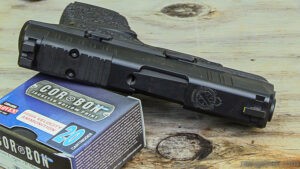 The Tritium U Dot nights sights are fantastic, and this pistol can be had optics ready.  The rear sight utilizes a tactical ledge allowing for racking the slide off a table ledge or such. 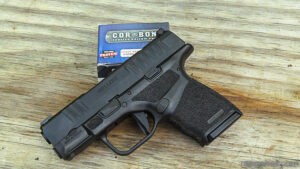 Features include a small accessory rail at the muzzle, reversible magazine catch, textured polymer receiver, and Gen 2 trigger breaking about five and a half pounds. The trigger had expected take up and over travel in a striker-fired handgun and included the incorporated safety. 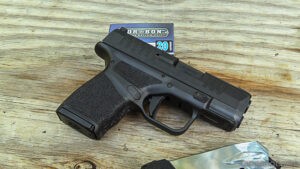 Generous beavertail to aid in a solid purchase on the small 9mm and enough forward and rear cocking serrations to comfortably rack the slide.  This pistol can be had in FDE if you prefer that over the black finish.

All total, we had about 500 rounds downrange with only a single failure, a failure to return to battery. Still, the flush-fit magazine failed to lock the slide open on an empty magazine several times during the review. The Springfield Hellcat is not a bad pistol, but I have to echo Candy’s thoughts as I was disappointed with it. On paper, it is a solid pistol, but in practice, I did not care for it. Recoil seemed a bit more snappy than I anticipated it to be. I understand the micro-compact pistols tend to be a bit snappy, but the Hellcat was not very comfortable to shoot, all things considered. While the sights were excellent, I liked the Sig P365 set up by a margin. The trigger was typical, and while it was not bad, it was not great. Out of everyone that shot it, only my mother liked the pistol, but she liked it quite a bit. With the night sights and accessory rail, it would be a good option for home or self-defense, but I would need to determine the reason for the failure and the slide not locking back on occasion. Small pistols tend to be very unforgiving, but with so many options today, the Hellcat would be at the bottom of my list. It stands to reason I will not like all the guns I have reviewed, but the Hellcat is my least favorite.

Between the Sig P365 and Springfield Hellcat, I would go with the P365 without a doubt.

Candy with the Gun Powder Gals

One Response to Springfield Hellcat, not what I was hoping for.