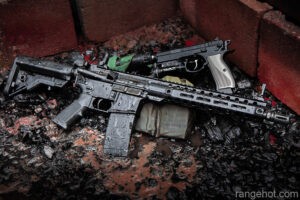 I have long been a fan of the old-school Colt M4 Commando, but as romantic as the rifle is, it has not kept up with the times. 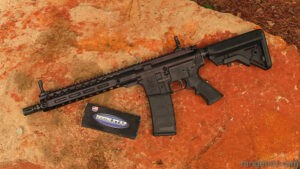 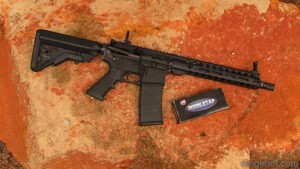 Enter in the Colt 6933 EPR, Enhanced Patrol Rifle, an updated M4 Commando. Gone are the old clamshell handguards, carry handle,  and A-frame front sight. Upgrades include a Bravo B5 collapsible stock, Centurion free float handguards, and Magpul Pro flip-up sights. The 6933 ships from Colt with an ambidextrous safety, advantageous for a few reasons, as explained in the video. 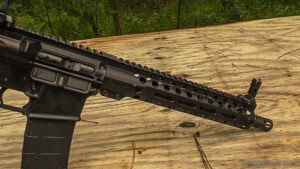 A closer look at the handguards shows the full-length Picatinny Rail and plenty of M-Lok attachment points offering more real estate for mounting optics and accessories. The trigger broke clean, just under seven pounds with a bit of take-up and a small amount of over travel, just about what you would expect from a quality duty trigger. 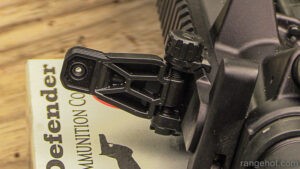 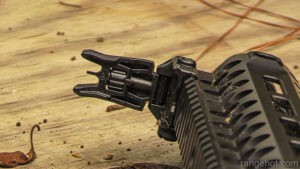 The Magpul Pro sights are an upgrade over the standard Magpul sights; being steel, they will hold up better to abuse while offering a smaller profile. The rear sight allows for windage adjustments, while the front sight post is the elevation adjustment.

3 shots from a rest at 100 yards with iron sights.

We ran some 500 rounds through the 6933 using the supplied thirty round Magpul magazine, thirty round Hex, and Colt metal magazines, and a twenty round metal Colt magazine with about half the rounds through a few different silencers. The CZ Ti Reflex silencer did very well on this rifle, as reviewed here. If an AR-15, especially an SBR, is running the ragged edge of reliability, adding the backpressure of a baffle silencer can induce bolt overspeed and will foul the rifle quicker, likely inducing a malfunction.  After three trips through the mud hole, the rifle had no malfunctions or misfeeds during the review. With those points in mind, if there were going to be a problem, it would have shown. The 6933 is built to the same rigorous standards as the venerable Colt 6920. This rifle is quite popular with law enforcement, and that speaks volumes for those looking for an SBR that is more than just a range toy. The Commando is brought into the twenty-first century with the updated handguards and sighting system, making it a strong candidate for home defense or self-defense rifle.  Averaging three-inch three-shot groups at 100 yards with iron sights, I am satisfied the SBR is plenty accurate.

Springfield Hellcat, not what I was hoping for.