By Hunter Elliott on March 5, 2018 in Product Reviews

The day Hi-Point announced they were introducing one of their carbines in 10mm Automatic, I called and got my name on the list for a test sample. Thankfully it was not too long; one showed up, and  I immediately got to work. It is no secret that the 10mm Automatic is my favorite handgun cartridge, and there has been an influx of new firearms chambered in 10mm.

Other than caliber, there are a few more changes to this carbine. While this model is still black, it is a bit more flat black. The cheek rest is a new softer material. While this adds some comfort for your cheek weld, it is a bit tacky so small debris, such as leaves and dirt, tend to stick to it. The barrel is factory threaded .578×28, which is the standard for .45 Auto and a common thread.  With a Weaver rail running down the length of the top of the receiver, below the foregrip, and below the barrel you have plenty of real estate to add accessories. 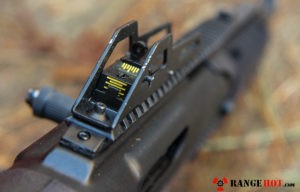 The rear peep sight is fully adjustable for windage and elevation. 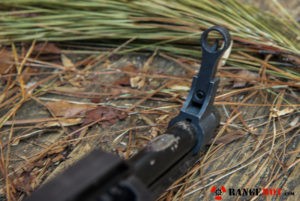 The front sight is a blade style. 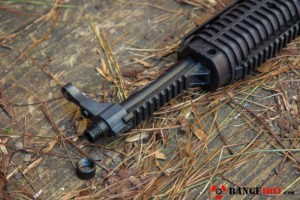 Hi-Point is using a .578×28 thread on this carbine. That is the standard thread for .45 Auto threaded barrels, which is more common than 9/16×24 usually found on 10mm and .40 S&W threaded barrels. Liberty Suppressors makes a fixed barrel adaptor in .578×28 for their Cosmic silencer. You can read my review of the Cosmic by following this link. Since the 10mm Auto is supersonic in almost all weights, it is not Hollywood quite but still hearing safe. 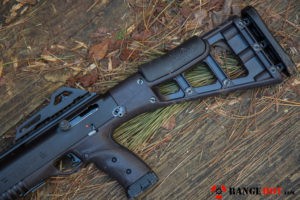 The charging handle, safety, and magazine release are the same as all other Hi-Point carbines. The trigger broke at six pounds with some take up and right much over travel. The bolt locked to the rear when the ten round magazine ran dry.

I am no stranger to Hi-Point firearm and have reviewed four carbines before this one so, I have a bit of an idea of what to expect. Several of my friends and myself have been running this one for about a month now. After about 350 rounds down range of standard ball and defensive rounds with no malfunctions, the 1095 TS is what I have come to expect from Hi-Point. This carbine would be perfect for a truck/ranch gun, being in 10mm Automatic it is plenty medicine for two and four legged predators. With the inclusion of three Weaver rails, you have plenty of options to attach accessories. Though I would like to see Hi-Point go to a Picatinny rail system, accessories that will work with Weaver are easy to come by, and many accessories will work with both systems. All the features that make this an excellent truck gun lend it to be an outstanding home/self defense firearm, especially if you are running a handgun in 10mm. Though I have not completed the ballistic test comparing the carbine to the handgun, I did learn you are gaining an average of 120-130 feet per second increase over the 4.6″ Glock 20 barrel, not to mention the increased sight radius. Hi-Point does include a sling and sling attachments, though I did not use that system much in the review. In conclusion, accuracy and reliability were as expected and with the increase of velocity and sight radius of the carbine, it will aid in making the 10mm a more effective cartridge.