Can you shoot .40 Smith and Wesson out of your 10mm Auto pistol? Yes, but you should not. Ever.

Straight walled pistol cases headspace off the case mouth. The .40 S&W is .142″ shorter than the 10mm Auto on average for in spec ammo. In case you do not know what headspace is, it is the distance measured from the part of the chamber that stops the forward motion of the cartridge to the breechface. With the .40 S&W being so short, the case mouth never reaches the beginning of the chamber and thus it headspaces off the extractor. I am not saying if you inadvertently run a few .40 S&W rounds through your 10mm you will have immediate issues. this is all based on prolonged use over time. 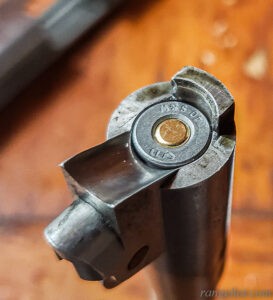 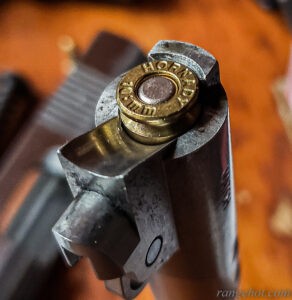 As you can see, the left photo is a Barnaul .40 S&W round in the chamber of a Dan Wesson Razorback. On the right is a Hornady 10mm round in the same chamber/barrel. Without the extractor holding the case head to the breechface, you can easily see how much further the .40 S&W drops into the chamber.

The extractor is now responsible for holding the case tight to the breechface allowing the firing pin to strike the primer. It is not designed to perform that task and will accelerate wear and significantly increase the chance of a malfunction.  The extractor is meant to extract; it seems so simple yet so many do not get it. Extractor….extract…. see how they sound similar?

With even occasional use of .40 in your 10mm, the end of the chamber will begin to flame cut. Since the bullet has a bit of a jump before the chamber it may enter the barrel off-center wearing on the sharp edges of that chamber, that along the burning powder abrading against those sharp edges, the chamber will be eroded causing excess headspace in the pistol. Excessive headspace is a dangerous condition in any firearm and will need to be remedied before operation is resumed. Before you have to deal with excessive headspace all that jacket material and fouling will build up at the end of the chamber so when you decide to return to shooting the correct cartridge out of your handgun reliability, and overpressure conditions will arise, yet creating more opportunities for an unintentional field strip, ie catastrophic failure.

I know the argument of .38 Special being shot out of a .357 Magnum revolver; however both cartridges are rimmed, and they headspace off the rim. There is no chamber cut into the cylinder for a rimmed cartridge. However, a Ruger Blackhawk in .45 Colt with a .45 Auto conversion cylinder, the .45 Auto cylinder, has a chamber is cut into each of the cylinder holes allowing the .45 Auto to headspace off the case mouth. When running out of spec short cased .45 Auto ignition can be erratic, showing again how important correct headspace is paramount.

A revolver in 10mm Auto that utilizes moon clips will allow safely running the .40 S&W, as the moon clip serves as the rim on straight-walled pistol case. It is advisable when running .38 Special out of your .357 Magnum revolver or .40 S&W out of your 10mm revolver using moon clips to clean the chambers thoroughly before going back to the longer cartridges and issues may occur, just as talked about above.

If you insist on running the .40 Short and Weak out of your 10mm Auto pistol have a .40 S&W barrel fit your handgun; otherwise, you are just plain wrong. Please do not send me your thesis on how long and how often you are running .40 out of your 10mm, as that is anecdotal at best and is about as far from empirical evidence as one can get.