By Hunter Elliott on August 12, 2016 in Product Reviews 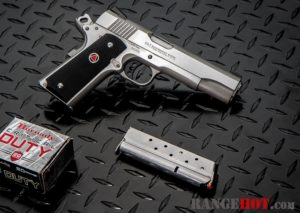 In my opinion, the reintroduced  Colt Delta Elite some years ago was good to go as it was, except for that ugly rowel style Commander hammer and wrap around rubber stocks. I reviewed that pistol two years ago and you can read that review by following this link.

I learned at this past 2016 NRA show that Colt introduced an updated Delta Elite. To be honest I had mixed emotions about this “update” but as long as the innards were not tinkered with too bad, I will reserve judgment until I am done with this pistol. 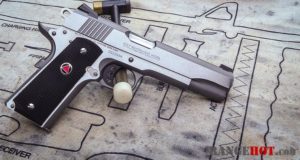 The new composite stocks, I like these much better than the older wrap around rubber stocks. 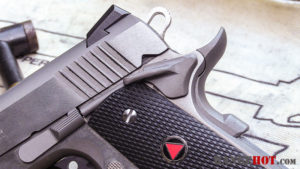 Here you can see the updated cocking serrations, extended thumb safety, new speed hammer, upswept bevertail grip safety with palm swell. In my opinion the old school cocking serrations were more attractive but with the new dual recoil spring the slide is a little tougher to rack. These more aggressive cocking serrations do allow for a better purchase on the slide when racking. Function over form. 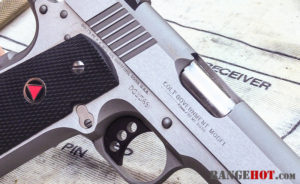 Here you can see the new aluminum three hold trigger, that broke clean at five pounds with just a touch of take up and overtravel. 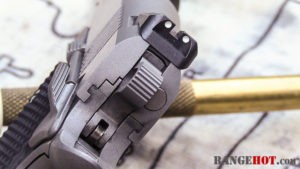 Slide to receiver fit was snug, but not so tight to effect function when dirty. 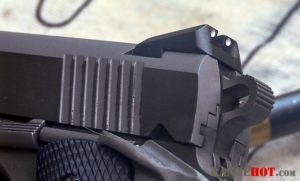 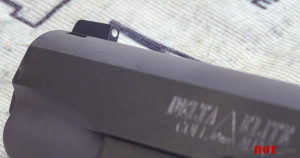 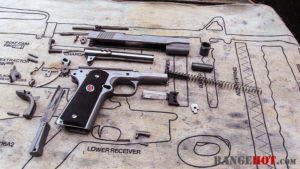 The Delta Elite detail strips as any other Series 80 Colt Government Model, with the exception of separating the duel recoil spring. Just a tug and the inner and longer outer spring separates off the GI style plastic guide rod. While the older Delta Elite did have a dual recoil springs most 1911s do not and with the more powerful cartridge they help slow down the slide a bit under compression. Also reducing a bit of perceived recoil  and has a much longer life expectancy.

Upon arrival I promptly loaded up some magazines and tried the new Colt out. After several magazines, I backed out to twenty five yards and rested the 10mm for some well aimed groups. Fifty rounds later and the pistol gave no issues. Much of the ammunition I used to test the pistol was the 200gr PMC FMJ and it can be had by following this link.  to Ammo For Sale.com 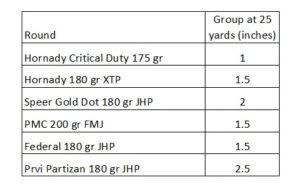 After a little over 350 rounds there were no failures, the new Colt Delta Elite is subject to the effects of limp wristing if you are not careful. With such a powerful cartridge a firm purchase is required but with the ergonomics of the Government Model that is easily overcame with correct technique. The Government Model, or 1911, has a very passionate following and for good reasons. The plain shootabality is about as good as handguns get, chambering such a platform in the powerful 10mm Auto really expands on the capabilities of that pistol. The 10mm Auto surpasses .357 Magnum energy in a magazine fed autoloader so you have an increased capacity along with a more powerful cartridge. The Colt Delta Elite is well suited to serve many roles, except as a first pistol perhaps. As for home and self defense the Delta is a solid choice. If you have any doubts on the big 10, you can read my ballistic test by following this link. The 10mm would serve very well as concealed carry in town as well as the woods, though ammunition choice should vary depending on circumstances. Something to consider though, the 1911 in 10mm has to be built correctly with maximum radial lug engagement, quality forged slides, and receivers. If you are interested in such an animal, be sure of what you are buying, that it is built well enough so it will be able to stand up to real 10mm ammunition with prolonged use. So, when in doubt, stick with the pony! That brings me to the whole, fully supported chamber in an autoloader misnomer. Though there are differences in throat and chamber specifications, no conventional autoloading handgun will ever truly have a fully supported chamber. Think about a revolver cylinder for truly supported handgun chamber. There has to be some sort of relief cut at the throat to guide the round into the chamber as it is fed from the magazine. If you want a fully supported chamber, buy that revolver. If the chamber supports the case up to the case web, you are good to go. The case web was designed to support the pressures for the cartridge it was designed for, so don’t get so caught up in that. In the semi automatic caliber debate, the 10mm Auto is truly king surpassing energies of all other common semi automatic defensive calibers, including the .357 Magnum. Full pressure 10mm auto rounds begin to tread into .41 Magnum energy. With all that righteousness comes a few drawbacks. Any handgun in 10mm is going to take more effort to control than lesser calibers, and true 10mm ammunition is expensive. Much of the stuff you find in the local gun stores will be watered downed to the point of .40 Smith and Wesson energies. If you plan to shoot a lot of 10mm, and you should, it would be wise to invest in a reloading press. After all that, I approve of the changes Colt has made to the Delta Elite but, to my friends at Colt, let’s not make it a habit of messing with the classics. Thanks to Max, Rich, and Mark. Well maybe not Mark. 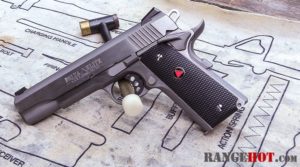