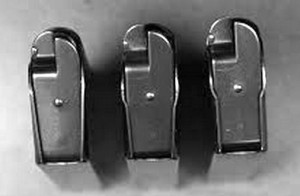 The 1911 Magazine Design: The Wadcutter Magazine

Many people sense that I have nothing but disdain for the “Wadcutter” type magazine. I suppose that’s partly my fault, but it’s actually not true. The wadcutter magazine is an excellent design…for what it was designed for. Take it outside of its venue…trying to use it for something that it’s not well suited for, and it often falls apart. This is true of many things.

In the slow-fire Bullseye game, full power is neither necessary nor desired. As noted, the short, stubby SWCs are marvelously accurate if driven to the velocity window that they were designed to best work within. Many .38 Special shooters who use the full wadcutters have noted erratic accuracy when the bullet is driven too fast. Sometimes, with some twist rates, the even tumble. Because the “Snub-Nosed” .45 SWCs are close to full wadcutter geometry, the same would apply. Keep the velocities at or below 700 fps, and they’ll cut cloverleaf groups. Drive them too fast, and they shoot all over the paper.

Along with reduced velocity comes reduced recoil, and the effect that it has on the gun. The 1911 isn’t a smoothly operating pistol. It’s very much a slam-bang affair, and the hotter the ammunition…the more slam-bang it gets. Reducing the velocity and recoil causes it to operate more gently.

This “Kinder/Gentler” 1911 doesn’t require the same features as originally designed to maintain control of the cartridges…so they can be eliminated. In some cases, they have to be eliminated in order for the gun to function reliably. Two such features are the strong magazine spring and the speed bump on top of the follower. Due to the lighter recoil spring and reduced slide rebound, the dimple can actually stop the slide in some instances.

The reason for the early, abrupt release with the short overall length is simple. Because the bullet nose contacts the feed ramp at a later point in the round’s forward travel…relative to the rim’s position in the magazine…and because the shorter cartridge causes a sharper upward angle on the approach…the release must be timed to turn loose of the round just as it starts to angle up so the rear end of the round will move up.

The problem comes when the OAL is longer. The round is released before the rim is well onto the breechface…before control is handed off the the extractor…and any loss of control opens the window for a misfeed. The round must be positively controlled until it’s fully chambered.

The misfeed comes in two flavors. Either the round chambers ahead of the extractor…known as a “Push Feed” and stops the gun…or it chambers and the slide’s momentum forces the extractor claw to snap over the rim, giving no clue that a malfunction has occurred until the extractor loses tension with relatively few rounds fired…or it simply breaks off flush with the breechface.

Note at this time one of my mantras:

Then, around 1980, Charley Kelsey introduced the first mass-produced 8-round flush-fit magazine, and all the 1911 shooters cried “Finally!” This design is still alive and well in the McCormick Shooting Star. It was a poor design in 1980…for serious “social” ammunition…and it still is.

There’s only one problem. Nay! Two!

Stuffing 8 rounds into a space designed for 7 makes it necessary to reduce the number of active coils in the spring, and shortening the rear leg of the follower. The problems compound from there.

With a standard follower, there are three coils of the spring bearing against it when the magazine is down to the last round…where spring tension is at a minimum. One in the top corner…one in the mid-point…and one near the bottom. The follower is thus stabilized, and rock solid. The Kelsey/Devel follower only provides opportunity for two coils. One in the top and one at mid-point. The followr pitches forward. The dimple that stops and positions that critical last round just before the release point had to go in order to keep the follower from being yanked completely out of the magazine and jamming up the gun solidly…thus losing both redundant features that worked to maintain control of the last round.

More than that…The Devel follower still pitched forward and did damage to alloy frames, such as the ones in LW Commanders. With a proper follower and spring, no such damage is seen because the follower is stable and can’t hit the frame. It also makes solid, positive contact with the slidestop lug, and makes slidelock on empty more reliable.

Chip tried to address the issues with his Powermag…which is essentially a Shooting Star with a nice finish, a removable baseplate, and a stronger spring. It helped a lot, but still didn’t completely solve the problems inherent with the design.

Enter the Wilson 47D 8-round magazine.

A vast improvement over the Shooting Star, but it was still equipped with too little spring and the lack of a speed bump on the follower. The spring has improved recently…but the top of the follower still lacks a positive stop for the last round…or at least it was the last time i had occasion to see a recent 47D.

The early Wilson 47/7-round magazines had a positive stop, but it was located in the wrong place. Not only the location of the dimple, but the shape is critical. Even the ones that have it aren’t correctly shaped…but they seem to work well enough, though sometimes they require a little tweak with a hammer and punch, along with a die sized to match the dimple.

It almost seems that the old watchmaker was determined to prove that he was smarter than Browning by refusing to put the dimple where it belonged…but that’s meat for another discussion.

The Wilson 47D and the Shooting Star and the Powermag are fine magazines for their intended roles. The problems come mostly because they’re being pressed into roles that they’re not particularly well-suited for.

One well-known pistolsmith advises replacing extractors every 5,000 rounds, or after one loses tension…whichever comes first. He also includes McCormick Powermags with his pistols. In the law enforcement profession, that’s what they call…a clue.

I wrote to him once, and offered him 5 bucks each for all the extractors that he removes at 5,000 rounds. He never responded.

If the day comes that I can’t use a good extractor…set it up properly…and get 50,000 rounds service from it without touching it other than periodic removal for cleaning…I’ll quit.

View all posts by John Travis →