It was a few months ago I received the relatively new PM-22  silencer from Inland. We ran some 400 rounds of .22 Long Rifle through the Ruger MK IV 22/45 Lite and Ruger 10/22 Take Down Lite,  about two thirds of the rounds were supersonic while the rest were subsonic

This silencer is quite a bit different from what you would expect to see, as it uses an all polymer monocore baffle stack. One aspect to consider the polymer baffle stack keeps the weight and cost down. Another way to look at this is seeing manufacturers thinking outside the box, applying new technologies and R&D to come up with new ideas on an old system. Think about it, when the polymer pistol receiver was sketched out, I have to imagine many others thought that was a bad idea, now you see where the polymer pistol world has gone.

Using my sound meter that measures the entire pressure wave, not peak pressure, the Ruger 22/45 and PM-22 measured an average 73 decibels using ten rounds of Gemtec subsonic ammunition. Using the Ruger 10/22 and the same ammunition averaged 68 decibels. This is comparable to other .22 LR silencers I have reviewed. As expected reliability and accuracy was not affected with either host. 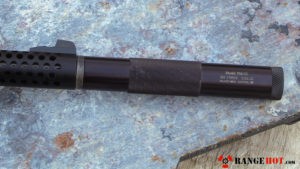 Baffle Design: Replaceable Polymer Monocore (Must be replaced by manufacturer)