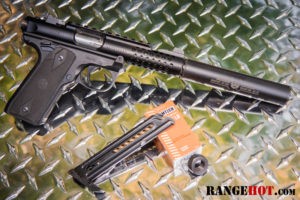 There is a recall on the new MK IV line of pistols, the details can be found by following this link. Suffice it to say though I had no issues with the pistol during the review.

The Ruger MK series of pistols are a favorite among rimfire enthusiasts. Though plenty accurate and reliable they were, to put it bluntly, aggravating as hell to disassemble and reassemble. Though it took Ruger a while to address this, with the new MK IV series of pistols they have finally fixed the disassembly/reassemble process. 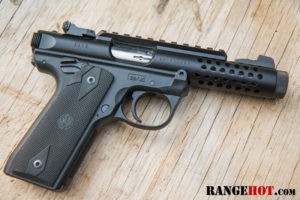 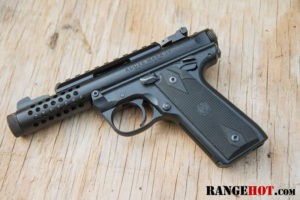 Ergonomics were about the same as a 1911, hence the name 22/45 which makes this pistol an excellent trainer. The right side of the ambidextrous safety may rub on your finger when disengaged. After a few magazines it was a non issue as you get used to the pistol. Factory stocks are rubber that resemble traditional 1911 double diamond stocks. The pistol ships with two ten round magazines, and does incorporate a magazine disconnect. 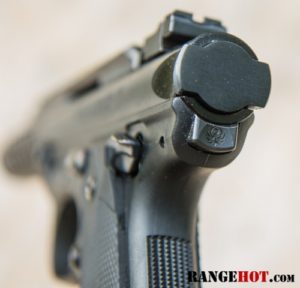 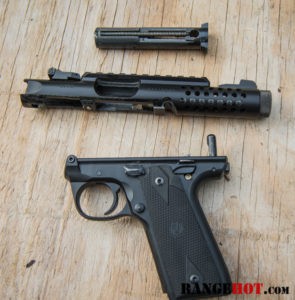 The “magic button” just below the bolt charging handle for simple and easy disassemble and reassemble. The rear strap is well serrated just up to the generous beavertail.  With the pistol unloaded and safety on simply depress and the pistol field strips. 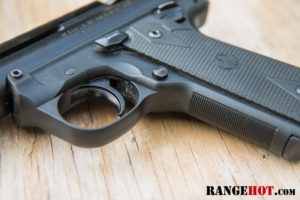 The trigger broke at 5 1/2 pounds with some take up and right much overtravel. Not a bad trigger at all. Notice the front strap serrations. The magazine catch worked well and the magazine ejected with enough force for it to fall clear empty. The slide stop took a couple of hundred rounds before it could easily be depressed to load the pistol from bolt lock. 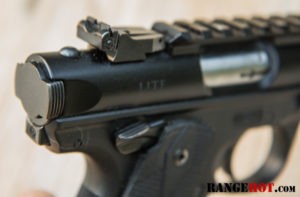 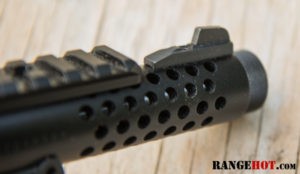 The rear sight is adjustable for windage and elevation. The front sight is a tall blade type. The sights worked well but the front blade is solid black. If in low light and and shooting against a silhouette target the front sight could get lost a little within the sight picture. Ruger does offer an optional fiber optic front sight and I believe that is a worthwhile upgrade.

The Picatinny rail did not interfere with the factory sights but is removable if you see fit. I ran the MK IV with a red dot for part of the review.

Though much of the review was run with the Ruger Silent-SR, reviewed here I also ran it with the 9mm Liberty Suppressors Centurion reviewed here  and the AAC Illusion 9mm reviewed here.  Since the MK IV 22/45 ships with a fixed 1/2 x 28 fixed barrel any silencer with that same thread pitch can also be used. That is a common thread pattern for 9mm silencers so if you have a 9mm can it will work well on this pistol. If you do run a silencer on the pistol often I would clean my pistol, magazine, and silencer about twice as often.  Since .22 Long Rifle is nasty to begin with, adding a can increases back pressure and fouls the pistol faster.

25 yard accuracy shot from a rest.

.22 pistols are a lot of fun and can serve well as training tools. The Ruger 22/45 has about the same ergonomics as the common 1911, but being lighter with less recoil and cheaper to shoot, it makes an ideal trainer as well as an accurate plinker. With the updated and much easier system to field strip and reassemble there are no more excuses to keep the little pistol well maintained. Over the past few months we ran about 1000 rounds of various .22 long rifle through the pistol. The only issues were with the Winchester 40gr, that had the occasional stem bind and Aguila 40gr subsonic that had trouble extracting with a full magazine. I attribute the failure to extract with the Aguila with the light propellant charge and the pressure of the full magazine pressing against the bottom of the bolt, as with seven rounds in the magazine there were no problems but topped off to ten there were occasional failures to extract for the first couple rounds. With the rest of the ammunition we tried there were no reliability issues over the approximately 1000 rounds we fired. .22 pistols can be a bit particular so it is a solid practice to find whatever ammunition works well in any pistol and run with that. The new Ruger MK IV 22/45 is in keeping with the traditions of the MK family with one welcome upgrade.

Since I published the review less than a day ago as I type this, I have received a few comments and several messages from folks telling me their rimfire pistols of various manufactures have had issues with the same Winchester ammunition I had issues with. So as I suspected it was an ammunition issue and nothing to do with the pistol.

Lee Johnson of Rebel Son, for help with the review and a generous ammunition donation