By Hunter Elliott on October 19, 2020 in Product Reviews 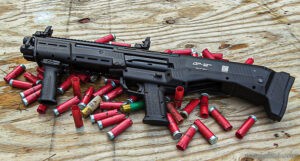 A couple of months ago, the Standard Arms  DP-12 double barrel pump shotgun showed up for a review. It is an interesting shotgun, to be sure. It is worth noting the QR code on the stock, allows you to scan it and get the instruction manual on demand. 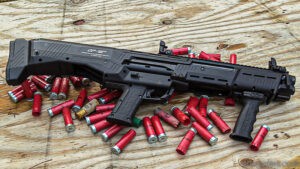 Being a double-barrel pump shotgun, it loads both chambers with a single pump. The first pull of the trigger fires the right barrel, and the second pull fires the left barrel. A quick tug on the action and the empty shells are ejected downward behind the pistol grip, and fresh shells are loaded into the chambers. 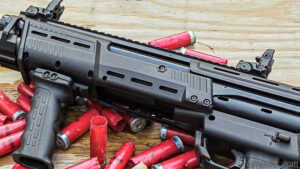 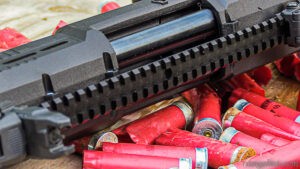 There is a full-length Picatinny Rail along the top and plenty of M-Lok on the sides of the shotgun, allowing you to set up the shotgun for whatever role you deem it to fill. Capacity is strong with fourteen three-inch shells, 16 two and three quarter inch shells, or twenty-four mini shells. Those numbers count plus two for each chamber being loaded. For example, each tube will hold seven two and three-quarter shells and two in the chambers for a total of sixteen. 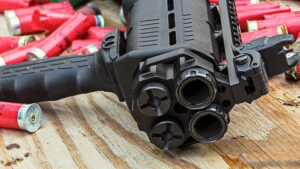 The DP-12 ships with Spreader Chokes optimized for patterning at twenty-five yards, but they can be swapped out for other chokes that use the Tru-Choke thread patterns if you see fit. Whatever way you decide, it is advisable to pattern the shotgun at several distances with whatever set up you like to be sure you are getting the desired results. 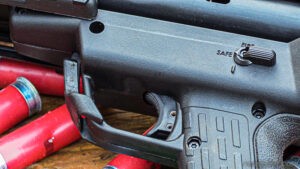 The Standard Manufacturing DP-12 is a very interesting bullpup shotgun, and even if it is not your speed, you have to appreciate the R&D it takes to make something like this work and work well. Manufacturers that think outside of the box is where the next generation of firearms are conceived. In my opinion, the DP-12 would be best suited as a defensive shotgun with plenty of capacity but short enough to be wielded in tight spots; where maybe a larger shotgun would be cumbersome. With the two magazine tubes feeding two chambers, it is almost like you have your full complement of ammunition and a reload already ready. Over the two months, we ran about 400 shells through the shotgun, mostly two and three quarter seven and a half and eight-shot, but we also ran some three-inch high brass and the mini shells. There were no issues, and the only failure was when my friend Rick was running the gun, and we had a bad primer. Recovering the shell the primer was heavily dimpled but failed to go off. It is worth noting that since this is a pump-action, he was able to cycle the bad shell out and keep on keeping on, where an autoloader would have taken a bit more effort to clear. All in all, I am satisfied with the DP-12 for what it was designed to do.

Thanks to Chris at Load N’ Make Ready for the help with the review.

4 Responses to Nothing standard about the Standard Arms DP-12.