By Zack Carlson on November 7, 2018 in Gun Talk, Product Reviews

In a previous article about trunk guns (see here) I briefly discussed having an IR laser and illuminator on your carbine for use with night vision goggles (NVG’s). I had selected a Steiner DBAL-D2 as the initial choice on the Daniel Defense pistol. 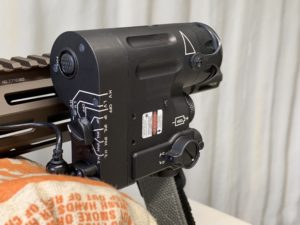 The Steiner is a fine choice for a civilian who can’t purchase a full power laser that .MIL/.GOV guys can get ahold of. The DBAL-D2 features a green visible laser for daytime use, a IR laser for NVG use, and an IR illuminator. You can think of an IR illuminator as a focused beam flashlight that you can only see with NVG’s.

Underside view of the DBAL showing the rail mount.

The unit mounts via a quick detach mount to any standard pic rail. It’s intended to mount at the 12 o’ clock position on the rail, but sometimes situations dictate another position. When I mounted this unit on the front of a 10.5″ carbine with a Vortex Razor HD 1-6 scope, at 1-2x power the thickness of the unit became an issue. At those lower powers, the unit simply took too much out of my visibility.

For a time I mounted it at 3 o’clock such as the photo above. This worked out ok but it was a tad bulky when storing the carbine. I ended up mounting it simply at 6 o’clock which seemed the best compromise. 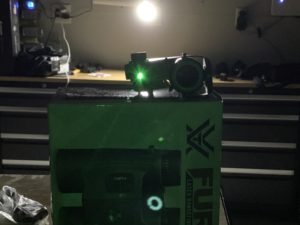 View of the green laser

Sighting in the DBAL was a snap due to the addition of the green laser. I already had the Vortex sighted in for the distance I wanted (50 yards in this case) and I simply dialed the green laser to the scopes point of aim at the same yardage. The DBAL’s IR laser is slaved to the visible laser, so adjusting the green also adjusted the IR.

It’s helpful to familiarize yourself with the included manual, as there are many modes of operation. The selector switch on the rear of the unit lets you choose between high and low visible mode, and a multitude of combinations of IR laser and illuminator. 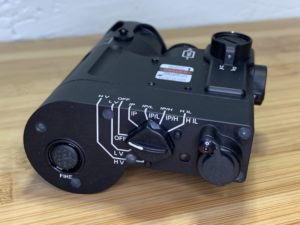 All the different modes on the DBAL-D2

Along the rear of the unit you’ll also notice there’s a remote switch port allowing you to plug in either the included single pad momentary switch, or other aftermarket options. I mounted a Surefire 2 position switch to control the DBAL along with a Surefire Scout M600 light.

Moving left you will also find a fire button, if you mount the DBAL in a comfortable position you can also activate the unit directly from this button. 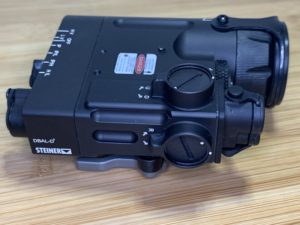 Side view of the DBAL-D2 with its windage and elevation adjustments.

The side view reveals the QD mount lever along with the windage and elevation adjustments for the lasers. Remember, adjusting the green laser also adjusts the IR laser, very handy! 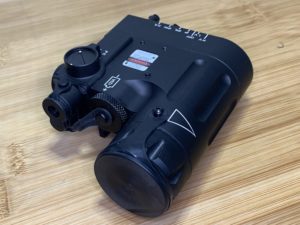 Moving around the front side shows the protective flip to side caps over the illuminator and lasers. You’ll also notice a indication behind the illuminator. You can twist the illuminators objective ring to focus the beam. I found this to not be noticeable in practice. 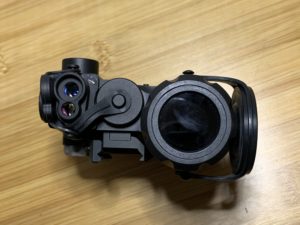 Protective covers removed on the DBAL-D2

Notice the tethered cap to hold back the single CR123A battery that powers the unit. Steiner claims over 3 hours of battery life depending on the modes used. I put a spare battery in it initially and it went dead fairly quickly. It wasn’t new out of the package so I won’t pass judgement just yet until the next battery dies. 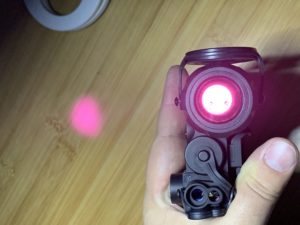 The IR illuminator does give off a soft red glow when in use. This shouldn’t matter to most civilians, but I figured I should mention it. The camera is looking directly into the unit, in practice being slightly off axis to the illuminator reduces the effect. 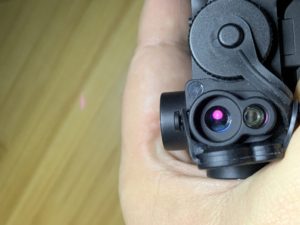 There is also a faint glow from the IR laser as well.

All in all, I really like the Steiner line of IR products. Some may argue the MAWL is a more capable unit, but with a $2,500 price tag, it is out of reach for many buyers. The Steiner retails for $1,540 and the street price is less. Click the links below to check current prices.

Also check out my video showing the unit filmed with my NVG’s.

See all the details on the DBAL-D2 on Steiner’s page here.

Disclosure: Some of the links in this post are affiliate links and if you go through them to make a purchase I will earn a commission. You will not pay any more for going through my links. I link these companies and their products because of their quality and not because of the commission I receive from your purchases. The decision is yours, and whether or not you decide to buy something is completely up to you.

My name is Zack Carlson and firearms have been a hobby since I was a kid. I currently am employed by Lone Wolf Distributors as a Special Projects Manager, encompassing both Production Management and Marketing Management. I enjoy long range rifle shooting and custom pistols. Because of my employment with LWD, I will not write about Glock related product. I do not want there to be any suspicions of a conflict of interest.
View all posts by Zack Carlson →