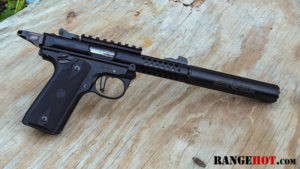 It was a couple of months I received the new Ruger MK IV 22/45 test pistol, and you can read that review by following this link.  By the time you are reading this I have paid Ruger for the 22/45 and claimed it is my own. As I was wrapping up the review Tandemkross  reached out to me asking about doing a review on a few of their aftermarket parts for the new Ruger. I have heard of Tandemkross but had no personal experience with the company, so I asked my contact at Ruger about them and he had nothing but good things to say about the company. So I was all in. 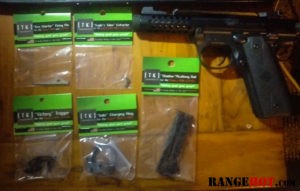 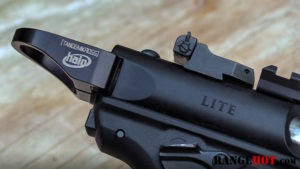 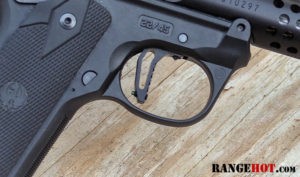 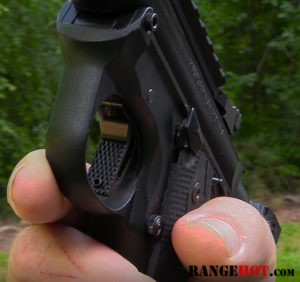 The serrations on the face of the flat Victory trigger is comfortable but offers excellent purchase. 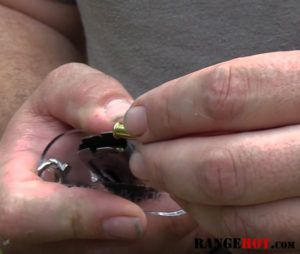 Looking over the parts they appeared to be good quality, but it is how they work that is most important. Spending about an hour or so following the instructional videos Tandemkross provided I swapped in all the parts, and in doing so accidentally cleaned the Ruger after some 1000 rounds. The most noticeable improvements before live fire was the Halo charging ring, making it much easier to manipulate the bolt, and the Shadow Picatinny Rail, being shorter than the factory rail with a groove cut down the center to aid in sight picture. The factory Ruger sights did sit above the factory Picatinny rail but the groove in the Shadow made sight alignment and sight picture a little easier. Tandemkross ships the Shadow rail with flat machine screws to affix it to the pistol, while the Ruger ships with Allen head machine screws, I elected to reuse the Ruger fasteners because I prefer Allen over flat head for such tasks.

I got a few friends together that helped with the original review to shoot the gun after the changes. Reliability was not affected with subsonic and supersonic ammunition with and without a silencer affixed, which I believe was more important. The new Victory trigger dramatically improved trigger pull all the way around, bringing the trigger pull from five and a half pounds down to four. Almost all of the take up was adjusted out and much of the over travel as well. Though I did not use the magazine loading tool much, Allison really appreciated the added leverage and less “wear and tear” on her fingers. I did appreciate the Halo Charging Ring after loading many magazines.

There was no immediate obvious difference with adding the firing pin and extractor but the long term benefits are there. The Firestarter firing pin is made of titanium and is some 40% lighter than the Ruger steel firing pin, decreasing lock time. Titanium being harder than steel, it will hold up better over time from usage and corrosion. The Eagle’s Talon extractor is machined from hardened tool steel with a bit of an exaggerated hook, while the Ruger steel extractor is stamped. Tool steel will always hold up much better than stamped steel and the exaggerated hook will yield better extraction results over the years.

All these parts were true drop in, providing you are not like me and actually clean your guns. Upgrading parts on firearms is almost as fun as buying the firearm and can serve to eliminate downtime or prevent an early end to a range session or match all together due to breakage. Think of these parts as a bit of added insurance on a gun that is an awful lot of fun to shoot. After my experience with Tandemkross I can personally recommend their aftermarket upgrade parts.